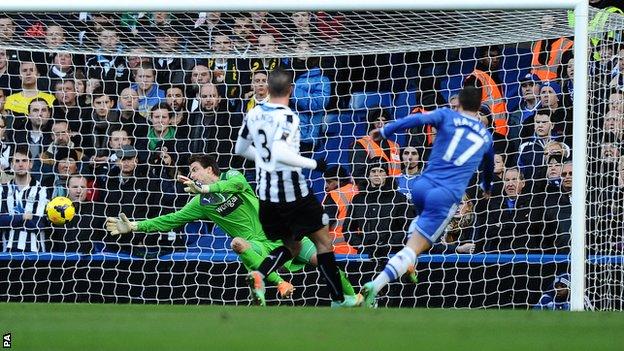 Eden Hazard scored a hat-trick to send Chelsea to the top of the Premier League with victory against Newcastle.

Hazard, magnificent in Monday's 1-0 win at Manchester City, was in inspired form throughout and drove in the opener from Branislav Ivanovic's pass.

Hazard got his third in the second half, scoring from the penalty spot after Samuel Eto'o was fouled.

With league leaders Arsenal losing 5-1 to Liverpool and Manchester City drawing at Norwich, Chelsea's win moved them one point clear at the top of the standings.

Boss Jose Mourinho had claimed earlier in the week that Chelsea were "the little horse" in the title race, but their win at City on Monday, coupled with this clinical dismantling of Newcastle, underlined their credentials as genuine contenders as they extended their unbeaten run to 10 matches.

Chelsea's recent fortunes were in stark contrast to those of Newcastle. They had won only one of their previous six games, had just lost to local rivals Sunderland, and were evidently struggling to compensate for the loss of playmaker Yohan Cabaye, who joined Paris St-Germain at the end of January.

There was some good news for Newcastle, though, as Chelsea captain John Terry, hugely impressive at the Etihad, missed his first league game of the season with a minor muscle strain.

Chelsea initially looked vulnerable in his absence as Hatem Ben Arfa twice created decent opportunities, going closest when he got the better of Oscar to force Cech into a save at his near post.

The home side soon gained a grip on the game, with Hazard in particular proving a menace to the Newcastle defence. It did not take long for the Belgium international to make a telling contribution as he put Chelsea ahead following a move he both started and finished. Hazard spread the ball wide to Ivanovic before racing into the box to rifle in a first-time shot from the return pass.

Newcastle should have been level just after the half-hour when Davide Santon sent Sissoko clear but the midfielder's first touch was too heavy, giving Cech time to race out and block the opportunity.

The 23-year-old ran towards goal before passing to Eto'o, who back-heeled the ball into the path of the winger, leaving Hazard to calmly side-foot into the far corner.

Newcastle looked a defeated side with Ben Arfa, who had been dangerous in early stages of the first half, struggling to impose himself on the game.

The away side almost conceded a third in embarrassing circumstances as Tim Krul was caught out by a long David Luiz ball that bounced over the stranded Newcastle keeper but dribbled wide of the empty goal.

Victory was wrapped up for Chelsea just after the hour when Eto'o was brought down by Mapou Yanga-Mbiwa when challenging for a corner, and Hazard sent Krul the wrong way from the penalty spot.

With the points safe, Mourinho opted to give new signing Mohamed Salah his first appearance in a Chelsea shirt and the Egypt winger almost grabbed a fourth late on, but shot straight at Krul after being sent clear by Oscar.

"We need our injured players back, especially for games at this level.

"Tottenham is a game I'd like to think we can get through and hopefully get a strong result.

"And then after that I think a lot of our big players will come back to us and for the next 13 games I think we'll be strong and then in the summer we've got work to do."