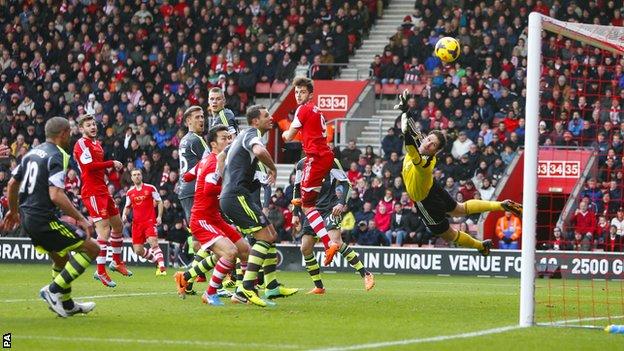 Southampton and Stoke shared four first-half goals as the Potters twice came from behind to earn a point.

The Saints went ahead early on when Rickie Lambert curled in a free-kick from the edge of the area.

The away side equalised through Peter Odemwingie's cool finish, before Steven Davis's cross-shot put Southampton ahead three minutes later.

Stoke's Peter Crouch headed home a minute before half-time, but neither side were able to find a winner.

Mauricio Pochettino's hosts had more of the possession, and the better chances, but could not take all three points.

Despite now having the worst away record in the Premier League with just six points collected from 13 games, Potters boss Mark Hughes will be pleased with the battling qualities shown by his players.

Skipper Charlie Adam, who scored twice in his side's 2-1 win against Manchester United last time out, was influential once again, laying on both goals.

Assisted by the wind, Stoke goalkeeper Asmir Begovic scored from 97.5 yards when the two sides drew 1-1 at the Britannia Stadium in November - and the players had to contend with similar blustery conditions on the south coast.

It took just six minutes for the home side to go in front. Former Liverpool man Adam handled the ball just outside the box, and England international Lambert stepped up to curl into the top corner for his ninth league goal of the season.

Stoke reacted immediately at the other end, but Odemwingie, a January signing from Cardiff, saw his weak shot easily saved by Artur Boruc.

Southampton's counter-attacking was causing problems for the visitors. Davis was allowed to carry the ball from one box to the other before feeding Nathaniel Clyne, whose effort was pushed away by Begovic.

Having weathered the pressure, Stoke levelled as Adam split the Saints defence to find Odemwingie and the Nigerian striker finished confidently when one-on-one for his first goal for the club.

But three minutes later, the home side went back in front as Davis's cross from out wide evaded everyone to go straight in.

And the frantic opening period saw its fourth goal just before half-time when Crouch, playing against his old club, nipped in ahead of Boruc to head home Adam's corner.

In contrast to the first half, the second was much more subdued. Davis glanced a header straight at Begovic for the hosts, while Jack Cork drove a shot narrowly wide.

Morgan Schneiderlin should have done better with an effort that hit the side-netting, but the Saints had to be content with a draw.

"We deserved to win that game, taking into account we took the lead twice in the game. The final result is disappointing.

"We were facing a very tough opponent and the most physical side in the Premier League. We were creating most of the chances and were unlucky not to get the third goal.

"Overall, we were superior to Stoke. The result does not reflect the superiority and we needed to be clinical in front of goal. We need to be more on the ball in our own area."

"We said before the game we need to improve our away form and it was an accomplished performance. We showed character to come back and restricted them to few chances in the second half.

"We haven't had the reward the performances deserved. We concede the first goal once again but it was fantastic strike. I was really pleased and once we got back on level terms we have control.

"Charlie Adam is having an impact on every game he is playing. If he continues in the same vein, he will score and assist more."