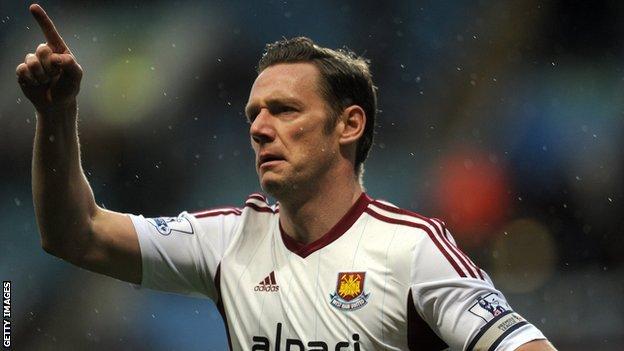 West Ham moved out of the relegation zone as Kevin Nolan scored twice for the second game on the trot to steer the Hammers to victory at Aston Villa.

Stewart Downing bamboozled Ryan Bertrand before crossing for Nolan to deftly flick the visitors in front.

The home side improved after the introduction of winger Albrighton but could not prevent an eighth home defeat of the season.

West Ham had failed in their determined efforts to overturn Andy Carroll's red card from the win over Swansea last week, but they shrugged off the striker's absence to register a third win from their past five Premier League outings.

The Hammers have improved as players have returned from injury, while Nolan coming back into the side following a four-game ban has also proved influential.

The visitors were unfortunate not to be ahead by half-time having had the better of the exchanges in the opening period.

"Kevin Nolan is the West Ham hero for the second game running. Villa created a few chances in the second half but it came at a time when you knew they would have more of the game. When it was 0-0 West Ham were the better side."

Former Villa winger Downing failed to connect with a low Matt Jarvis cross to the far post, while Matt Taylor had an angled shot saved by Guzan.

Jarvis was then sent clean through on the Villa goal but, under pressure from defender Nathan Baker, the West Ham winger sent his shot wide.

Villa struggled to muster a threat until late in the first half when Hammers defender George McCartney's clearing header fell to Ashley Westwood and he powered a strike just wide.

The visitors were undeterred after the break and finally earned a reward for their efforts when Downing jinked his way past left-back Bertrand and crossed for Nolan to produce a clever finish.

Nolan, who scored twice against Swansea, extended his side's lead as he robbed Delph just outside the area before steering in a shot.

West Ham then allowed Villa to dominate possession and almost paid the price.

Albrighton, an influential second-half substitute, saw his 25-yard shot hit the post, while Villa forward Benteke hit the bar with a header and went close with an acrobatic overhead kick.

West Ham held on for their 12th clean sheet of the league campaign, the most in the top flight so far this season.

"It was a thoroughly professional performance in the second half. In the first half in terms of attacking play, we were excellent but couldn't find a goal.

"Kevin came up with the goods again. That is four in two games and he showed he doesn't need Andy Carroll to score.

"It is a fantastic win at this stage of the season. For us to put back-to-back wins together is very important and really does build your confidence."

"Whether Andy Carroll was playing or not, we knew it was going to be a difficult game. The two goals we lost were really poor.

"There are a lot of teams in there [fighting for survival]. There is no panic, you just need to try to win more games than not.

"You cannot concede two goals like that and expect to win a game."