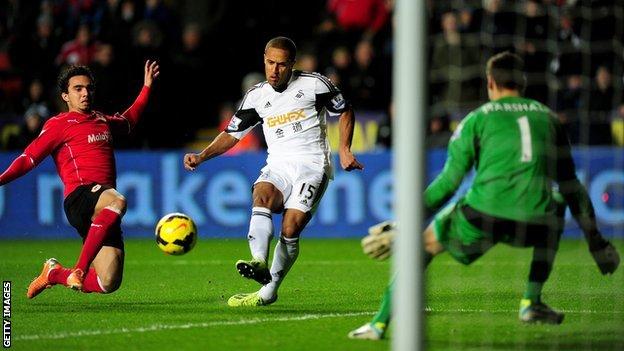 Ole Gunnar Solskjaer, who has only one win in five league matches since succeeding Malky Mackay as Cardiff boss, will now target wins against Aston Villa and Hull if his side are to offer some fight against relegation in their debut Premier League season.

His opposite number Monk, 34, made a seamless transition to management, having been made Swansea boss this week after the controversial sacking of Michael Laudrup.

Only one league win in 11 outings ultimately ended Laudrup's 19-month reign as manager and Monk, still a registered player for the club, was appointed "for the foreseeable future".

His presence was felt, as after being blunt in defeat at West Ham last weekend, Swansea showed the competitive edge fitting of a side playing for a new manager.

Cardiff have conceded at least two goals in eight of their last nine Premier League games and defeat means Ole Gunnar Solskjaer has lost four of his five league matches as manager.

Three points separated the sides ahead of kick-off and Swansea started brightly as Routledge shot straight at David Marshall before Bony made the Cardiff keeper save at his feet.

Cardiff looked to play on the counter-attack and Kenwyne Jones headed their first chance narrowly wide in a first half void of end product.

Shortly after the break, Routledge, who had a loan spell at Cardiff in 2008-09, surged into the area to curl a low shot into the corner after a superb pass by half-time substitute Hernandez.

The visitors looked to hit back straight away with Bellamy's smashed shot hitting the bar from the edge of the area. The miss, which would prove costly, was greeted with cheers almost as loud as those afforded to Routledge's opener.

Monk, dressed in a tracksuit and hugging the boundaries of his technical area, encouraged his troops to press on and kill the game.

And it was not long before he was pumping the air in delight as the Swans scored twice in five minutes through headers from Dyer and Bony.

Dyer - one of the smallest players on the pitch - ghosted past his marker to connect with Routledge's hanging cross from six yards.

And Bony then powered home Hernandez's delivery to earn bragging rights for Swansea and breathing space above the Premier League relegation zone.

"We got into half time with a good performance in the first half. But then we gave away a poor goal. We had chances, we had a massive chance with a free kick just before they scored.

"You always go into these derby games with heart and the passion would always be there. Garry Monk got off to a great start and we have to respond on Tuesday.

"We stand together as a team. We tried but didn't get that quality we hoped for. The lads in the dressing room are devastated, which they should be because they have maybe lost the most important game of the year, but their character is great and they will bounce back."