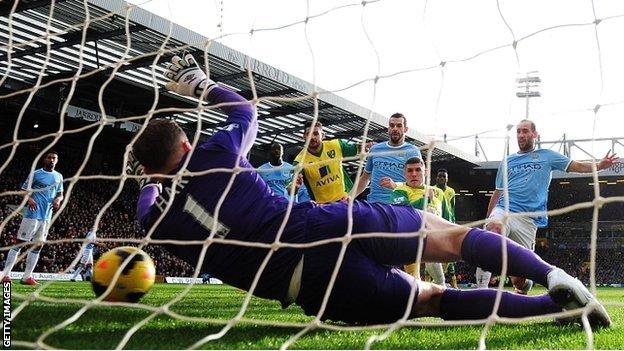 Manchester City squandered a chance to return to the top of the Premier League as they were held at Norwich.

The visitors seemed short on confidence after Monday's defeat by Chelsea, and their only genuine chance came when Alvaro Negredo headed against the bar.

Norwich's Nathan Redmond fired high and wide before Jesus Navas was off target.

Manchester City had to hang on near the end as Norwich were inches from scoring and, after Chelsea beat Newcastle, they slipped to third in the table.

Despite Jose Mourinho's side replacing Arsenal as league leaders, Manuel Pellegrini's side remain two points off the summit.

But the 1-0 loss to Chelsea, which ended a 20-game unbeaten run, seemed to have a lasting effect on a team who have previously scored freely this season.

And they were fortunate they did not lose twice in a week after a late scare when Ricky van Wolfswinkel and Anthony Pilkington somehow failed to connect with Redmond's cross, before Pilkington curled another opportunity over.

Manchester City thumped Norwich 7-0 at Etihad Stadium in November, but chances were at a premium at Carrow Road with the Canaries well disciplined in defence.

City grind to a halt in league

The result means the visitors failed to score in consecutive Premier League games for the first time since January 2012, and the point keeps Norwich two points above the relegation zone in 16th place.

Without Sergio Aguero, Samir Nasri and Fernandinho, the visitors lacked pace in attack, while their strikeforce of Stevan Jovetic and Negredo disappointed.

And they would have gone behind early on had Redmond not skewed an angled shot over with only Joe Hart to beat. Gary Hooper also had a goal disallowed after being correctly ruled offside following a corner.

Those opportunities seem to give the visitors a jolt and, after dominating possession with James Milner in the heart of midfield, they began to add incisiveness to their play.

Negredo headed against the bar following a Martin Demichelis flick-on from Navas's corner and the Spanish striker then smacked a shot just wide before Jovetic tested John Ruddy in Norwich's goal.

Good defending by Russell Martin and Martin Olsson prevented further chances, while Joseph Yobo added ballast to the defence on his Norwich debut, his first Premier League appearance since 2010.

Jovetic was replaced by Edin Dzeko, before Negredo was puzzled by his substitution as Aleksandar Kolarov came on, but they could not find a breakthrough.

Pellegrini's side continued to press for a winner and suffered a further moment of worry when a Yaya Toure kick on Van Wolfswinkel was not seen by the referee.

They will want their injured players back before they face Chelsea in the FA Cup and Barcelona in the Champions League later this month. And Wednesday's game at the Etihad against lowly Sunderland could be the perfect opportunity to find their feet again.