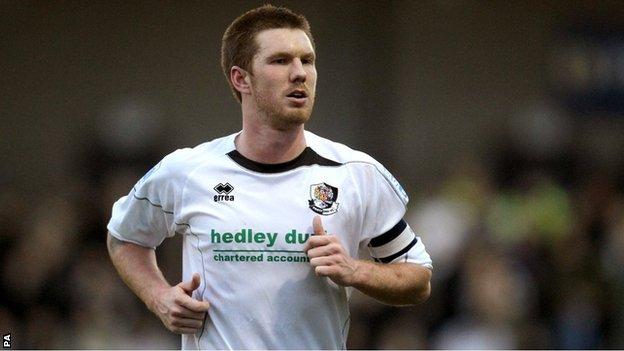 Dartford boosted their survival hopes with victory at Wrexham.

Andy Pugh opened the scoring for the visitors from close range when Wrexham goalkeeper Andy Coughlin failed to hold a free-kick.

The Dragons equalised after Dartford failed to deal with a corner and Joe Clarke kept his composure to sweep the ball home.

But Elliot Bradbrook restored Dartford's lead on the stroke of half-time after Pugh's shot was half-saved.

Victory moves the Darts two points from safety in Conference Premier while Wrexham are now eight points off the play-off places.

"We've gifted two goals today off our own comfortable possession in our half.

"They've nicked it off us and caught us, but we've had chances to win the game, chances to not lose the game and we've not taken them.

"I'm just hugely disappointed because we've had a great week, a really bubbly week, probably the best week's training this season and then you get hit with that at the end of it."

"It's a very difficult place to come so to come away with three points is fantastic.

"It was a heavy pitch and the open chances fell to us. The second half was backs against the wall but you have to expect that against Wrexham.

"We defended very very well today. We showed a lot of spirit and all round it was a good performance.

"Whoever made the least mistakes was possibly going to win the game and I thought we were solid all the way through the 90 minutes."