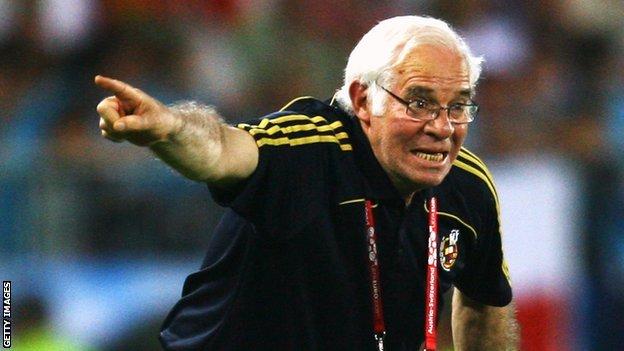 Aragones led Spain to their first major trophy at an international tournament in 44 years with victory in the 2008 European Championship.

He also managed several of Spain's top clubs, including Barcelona and Atletico Madrid where he won the La Liga title in 1977.

As a player, he scored 172 goals in 372 games when at Atletico and represented his country on 13 occasions.

The Spanish Football Federation issued a statement that "expressed its grief and shock at the death of Luis Aragones".

The statement added: "[He was a] former player and coach of several Spanish and global clubs and the Spain national team at the beginning of their glorious success on the worldwide stage."

Atletico said in a statement: "One of the greatest Rojiblancas legends has left us."

The club's president Enrique Cerezo added: "Luis Aragones was a great player and coach, but above all a great person and a friend.

"On behalf of the whole club, I want to express our condolences to his family."

Aragones took over as manager of the national team in 2004 and went about making wholesale changes.

He dropped players such as Raul and Michel Salgado and then introduced a new playing style of short-passing football which was bringing success to Barcelona.

He left the post soon after, but the foundations were there for Spain to go on and win the 2010 World Cup and defend their European title in 2012.

However, during his tenure the Spaniard was fined 3,000 euros (£2,060) for racist remarks made about former Arsenal striker Thierry Henry to Spain's Jose Reyes.

At the time he insisted the comments were meant to motivate the Spanish player, by comparing him favourably with club-mate Henry, and were not intended to be offensive.

At the time of Spain's success in 2008, midfielder Xabi Alonso said: "He is one of the main reasons we won the title. We have been through tough moments during these two years, but he stuck with the same team, having confidence in the players. Those decisions were the right ones."

Aragones went on to coach Turkish side Fenerbahce, but was unsuccessful and left after just one season.

At club level, he also won three Copa del Rey trophies with Atletico Madrid to add to the league title.