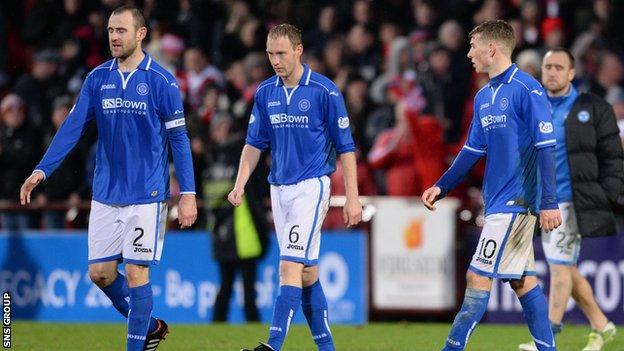 Manager Tommy Wright was left to rue defensive lapses as St Johnstone lost 4-0 to Aberdeen in their League Cup semi-final.

"They deserved it because they were more clinical but I think we put a lot into the game," he told BBC Scotland.

"Sometimes football can be cruel and it was one of those days for us today.

"I thought we controlled large parts of the first half but we know we've contributed to three of the four goals and that is disappointing."

Jonny Hayes was first to profit from some uncertain defending as he fired Aberdeen in front after three minutes at Tynecastle.

Saints hit back well and enjoyed the bulk of possession in the first half, with a Lee Croft shot pushed onto the the post by goalkeeper Jamie Langfield.

But the Perth side were caught out by an impressive surge from Peter Pawlett, who tucked away the Dons' second goal before the interval.

Goals from Adam Rooney and Hayes followed in the second half as St Johnstone fell out of the game.

"I don't think Aberdeen had to work hard enough for their goals," added Wright. "You just can't win semi-finals by gifting goals away.

"Even in defeat, we'll take a lot of positives from it. I thought we played extremely well. We just lacked that clinical touch in the last third.

"We put them under a lot of pressure in the first half and we hit the bar before the third goal.

"I'm proud of the way the players kept at it and how they responded to going 1-0 down against a very good side."

St Johnstone visit Forfar next in the Scottish Cup and Wright is already looking forward to getting this defeat out of his system.

"The players are hurting in the dressing room because they are good, honest professionals," he said.

"But we still have a lot to play for this season and our thoughts will go to next weekend's game at Forfar.

"We want to progress in the Scottish Cup and there's still a lot to play for in the league.

"This is a disappointing day for the supporters and club but we will bounce back from it."