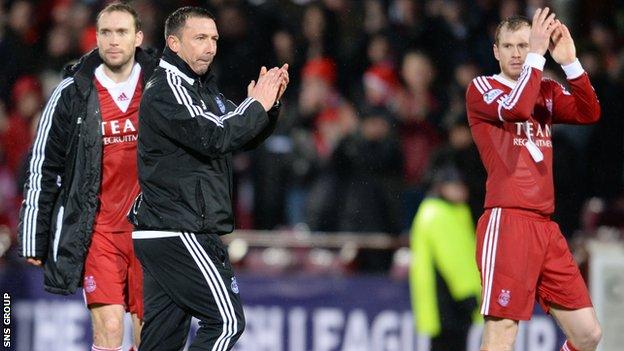 Manager Derek McInnes was thrilled by Aberdeen's finishing as they beat St Johnstone 4-0 at Tynecastle to book a place in the League Cup final.

Having taken an early lead, the Dons lost their way but survived a period of pressure to run out convincing winners.

"We were clinical today, we were untidy at times and poor at managing the game in the first half," McInnes told BBC Radio Scotland.

"But, overall, I can't complain with 4-0 against a good St Johnstone team."

Jonny Hayes knocked in the opener on three minutes and the winger rounded off the scoring after goals from Peter Pawlett and Adam Rooney.

"Obviously it was a great start but I thought we were poor after that," admitted McInnes.

"It was too frantic and we gave away far too many free kicks, giving them opportunities to get the ball into our box.

"We got too excitable and I was desperate to get them back in at half time.

"But then we got the second goal from a really incisive bit of play - and we know we've got that.

"The message at half time was to try and have a bit more discipline and manage the game better and I thought we did that.

"The onus was on the team who were 2-0 down in a semi-final to come out and maybe they would unravel.

"That's what happened and the two goals after that were good, slick bits of football, with good finishing."

During St Johnstone's best spell Jamie Langfield pushed a Lee Croft shot onto the post and McInnes was full of praise for his defenders.

"I thought Russell Anderson, Andrew Considine and Reynolds were outstanding during that period," he continued. "They were brave, winning headers and the like.

"The second half was far more like the way I wanted the game to be played."

Aberdeen last won the League Cup in 1995 and have not contested a final for 14 years when they were runners-up in both the League Cup and Scottish Cup.

Dons fans, who gave their side terrific backing in Edinburgh, have endured many semi-final heartaches in that time.

"It's natural that people look back to previous disappointments, even teams that have done well for Aberdeen," said McInnes.

"But I think it's unfair on this group. This was our first opportunity to get to a final and we've done it at the first attempt.

"We can only influence what we can do, not what's happened in the past.

"We've been handling pressure most of the season and I didn't think it would be an issue today.

"And the players deserve the reward of a cup final - they have got a great work ethic and a great togetherness."