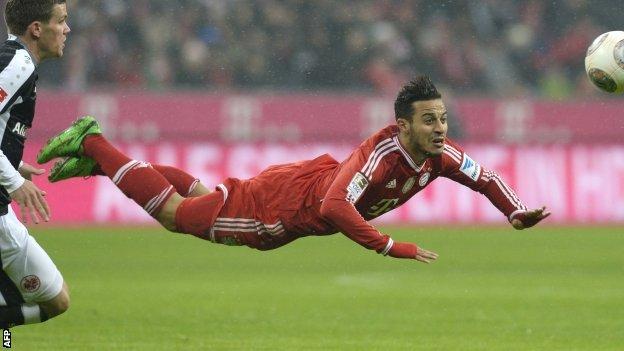 Mario Gotze volleyed them ahead as they set a top-flight European record of scoring in 56 consecutive league matches, beating Arsenal's 55 in 2001.

Franck Ribery doubled the lead from inside the area and substitute Arjen Robben fired in from close range.

1 June: Became the first German side to win the Treble with a 3-2 German Cup final win against Stuttgart

It now seems only a matter of time before they are confirmed German champions for the 24th time, as they kept a 13-point Bundesliga lead.

Pep Guardiola's defending European champions face Arsenal in the last 16 of the Champions League later this month in their bid to repeat last season's success.

Coach Armin Veh opted to rest midfielder Sebastian Rode and defender Carlos Zambrano ahead of a home match against bottom side Eintracht Braunschweig at the weekend.

In Bayern's first home game of 2014, it was not long before the fans were given what they expected as Gotze clinically finished a sweeping move.

Dante's cross-field pass was knocked back by the head of Mario Mandzukic into the path of Gotze, who chested the ball down before volleying low into the corner of the net.

Ribery then reacted quickest to a loose ball, after another Mandzukic header, to fire the hosts into a 2-0 lead from 10 yards just before the break.

Gotze then saw a shot hit the post and Ribery crossed against the bar before Robben rifled in a shot from close range, via the crossbar, and Dante glanced a header into the net soon after.

The scoring was completed in the dying seconds when Mandzukic collected the ball inside the penalty area, jinked inside and curled the ball into the corner.

Shots on Target
Home14
Away3