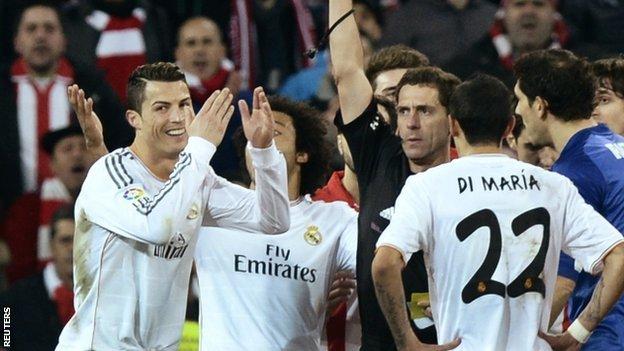 Cristiano Ronaldo was sent off as Real Madrid's eight-match winning run ended in a fiery draw at Athletic Bilbao.

The Portuguese received a straight red card late on after raising his hands in a confrontation with Carlos Gurpegi as Real missed the chance to go above Barcelona into second place in La Liga.

Jese gave the visitors the lead on his full league debut as he stabbed home Ronaldo's low cross after the break.

Ronaldo's likely three-game absence could well have an impact on a competitive title race.

And it could have been worse for Los Blancos, who saw their eight-match winning run in all competitions ended by an Athletic Bilbao side unbeaten at home in the league all season.

Iker Muniain and top scorer Aritz Aduriz both missed good chances for the hosts in the opening half, as Real struggled to hit the heights they have found so far this year.

Going into the match, Carlo Ancelotti's men had won every game they had played in 2014, scoring 17 times and not conceding a goal.

And despite a below-par first half, they looked as though their perfect start to the year was going to continue when 20-year-old Jese - in for the injured Gareth Bale - put them ahead.

Ronaldo's low pass across the face of goal after 65 minutes was met by the debutant's lunge, and he succeeded in directing the ball into the corner.

Bilbao brought on Gomez for Muniain soon after and the new man made an instant impact with a superb goal less than a minute later.

The substitute lofted the set-piece into the area and, after it was headed clear, he met the loose bouncing ball on the edge of the area with a stunning strike that flew in off the far post.

And things got worse for Real as Ronaldo was sent off for reacting to a shove by Gurpegi, although it appeared he made little or no contact as he waved his hands towards the defender's face.