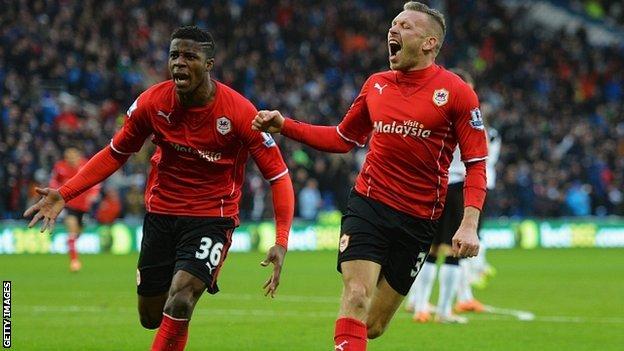 Cardiff manager Ole Gunnar Solskjaer praised substitute Wilfried Zaha after the debutant played a vital role and helped inspire his side to victory.

Zaha, brought on in the 38th minute, created Cardiff's first goal as they came from behind to beat Norwich 2-1 and move off the bottom of the league.

"Zaha came on and made the difference," said Solskjaer, who won his first league match since taking charge.

"He has pace, power and technique. We just have to teach him defending."

Initially left on the bench by Solskjaer, his introduction seven minutes before the break drew a huge cheer from the crowd and he repaid their faith with a game-changing performance.

Darting in from the left, he slipped a perfect through-ball to Craig Bellamy, who became the first player to score for seven different Premier league clubs as he cancelled out Robert Snodgrass's opener with a low finish.

"It was a decision I had to make there and then," added Solskjaer. "I was hoping we'd be in a better position, but I felt we needed some spark, and that's what we got from Zaha."

Less than two minutes later, Kenwyne Jones marked his debut with a goal, firing home from close-range at the second attempt after his initial header was blocked.

Cardiff were indebted to their goalkeeper David Marshall, who produced a string of superb saves to deny Norwich, who also struck the woodwork twice and had two goals disallowed for offside.

Solskjaer admitted his team had ridden their luck to come away with their first win in eight league games and his first victory in the league after three defeats.

"Before now, we've had some very good performances but no luck," said Solskjaer. "Maybe the fair result would have been a draw if you look at possession and shots, but we got a result with a little bit of luck."

Jones, who joined Cardiff from Stoke in a swap deal with Peter Odemwingie, said he hopes the result can mark a turning point in his new team's season.

"I think a win breeds confidence in the squad," he said. "The team was a bit down but hopefully today is the start of a new era."