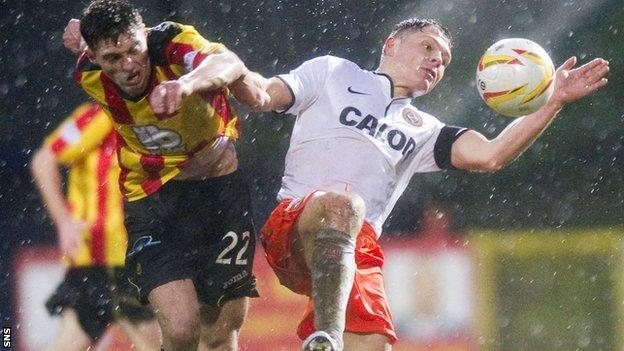 Jackie McNamara thought Dundee United should have had a penalty in their 1-1 draw with Partick Thistle.

McNamara was left frustrated as he believed Stuart Armstrong was fouled by Jordan McMillan in the box.

"I felt we had a good opportunity for a penalty," he told BBC Scotland. "If it was anywhere else the referee would give it.

"I was also disappointed with the challenge on young Andrew Robertson, which didn't even merit a foul."

It means United's disappointing run of form continues as they have now gone seven games without a victory, despite Farid El Alagui's opener, his first since joining the club, after a surging run from the impressive Robertson.

Of El Alagui's goal McNamara said: "Yeah, hopefully it's the first of many. I'm delighted for him I thought it was a fantastic move. Young Andrew Robertson showed great composure as there's not many who would have squared it in that position."

Gary Fraser's second-half equaliser ensured Partick a share of the spoils, but the visitors had a great chance to extend the lead through Armstrong but he dragged his shot wide following incisive play from the midfielder and Gary Mackay-Steven.

And the United boss says he was disappointed they could add to their one-goal advantage.

"We had a chance to kill the game off with Stuart, but we got deeper and deeper and we paid the price for it," he continued. "Stuart's missed the ball and it's came out and I think it's took a deflection and unfortunately for us it's went in the back of the net.

"In the second half we looked a bit nervous probably because of results of late. We went too deep at times and we stopped passing the ball, but credit to Thistle they came at us but disappointed not come away with the three points."