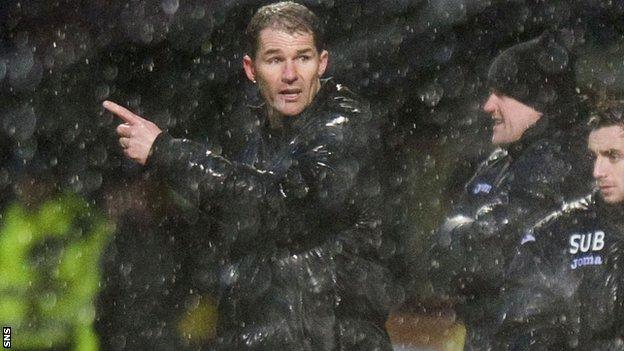 Alan Archibald believes Partick Thistle should have grabbed their first home win of the season against Dundee United.

The Jags fell behind to a Farid El Alagui strike in the first half, before Gary Fraser levelled matters in the second period.

"I thought it was a good performance, especially in the second half," Archibald told BBC Scotland.

"We pushed up until the end and we probably deserved to nick it."

Thistle are still without a home win in the Premiership this season and Archibald admits concern at the effect it is having on his players' mentality.

"I think today we did not start that well and that was probably down to our home record playing in the back of our minds," he said. "Hopefully if we keep on playing the way we did today it will come.

"It's two points dropped when you see the other teams drew today. It continually puts pressure on our away form but we don't want to have to rely on that."

Partick had a couple of chances that fell to defender Conrad Balatoni, before United took the lead through El Alagui, who had a simple tap-in, following great individual play from full-back Andrew Robertson.

However, Archibald was pleased with his side's response to going behind.

"We were a bit disjointed in the first half but I thought we created the better chances," he continued.

"We had a couple from a corner, and then we got caught with the sucker punch when we were attacking. United do what they are good at and picked us off on the break."

The Thistle boss also reserved special praise for goal-scorer Fraser, who he says showed a maturity beyond his years.

Archibald added: "I thought he was outstanding. Sometimes you watch Gary play and he looks like an experienced professional, but he's only a young lad.

"I thought he deserved his goal for his performance."