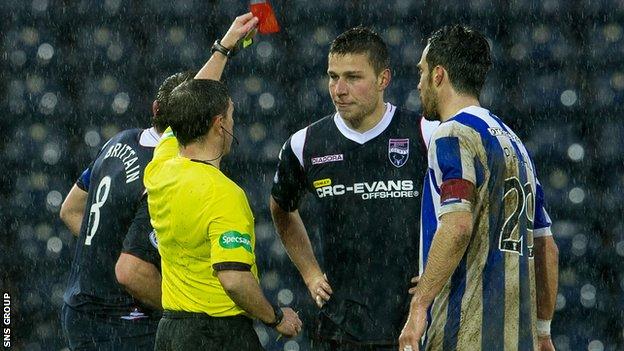 Kris Boyd levelled the game with a brace, the second of which came in stoppage time, and Adams disputed the legality of both goals.

And he was less than impressed by the decision to send off his midfielder Filip Kiss on 76 minutes.

"It's not the first time this season I've been disappointed with Crawford Allan," Adams told BBC Radio Scotland.

"There's nothing I can do. I can't talk on the television or on the radio or I'll be reprimanded.

"It's for other people to see what's happened."

Adams played down a touchline bust-up between the rival dugouts, saying simply: "We were talking about the second goal.

"It is a great testimony to how far we have come that Kilmarnock are so delighted to get a point that (manager) Allan Johnston races past my dugout to celebrate."

Adams, who described the result as a "travesty", then spelled out his concerns with Boyd's goals.

"The first is from a cross into the box and Boyd had handled the ball, the ball stops and play stops and then he swivels and puts it into the net," he said.

"That's hugely disappointing. It's a handball.

"For the second one, he's got two hands on my defender going up for the ball. He doesn't allow my defender to get off the ground."

Loan signing Kiss was dismissed for a second booking but, again, Adams thought Allan had got it wrong.

"He gets a booking for a challenge in the first half and in the second half he actually gets fouled, I believe, before he gets sent off," he explained.

"We've had a sending off and a couple of bookings and Kilmarnock haven't had anything."