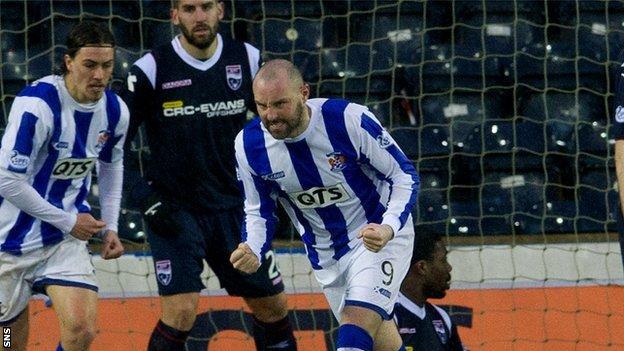 The Staggies stormed to a two-goal lead through goals from Yoann Arquin and Yann Songo'o, but Boyd's double, his second in injury time, rescued a point.

"It was an unbelievable finish for the second goal," Johnston told BBC Scotland.

"It was real bravery putting his head in there and just shows how important he is."

Boyd's first goal had an air of controversy about it, as the ball looked to have come off a hand in the box before the striker turned it in.

However, Johnston played down the incident.

He said: "It didn't look like a hand from where we were.

"It's just typical Boyd. He's always there whenever the ball comes into the box."

Despite slumping to a two-goal deficit in the first half, Johnston felt his side were unlucky to be behind.

"The boys knew themselves that they had played well in the majority of the first half," he continued.

"We maybe lost our way after the first goal, but after that it was all about trying to play in their half a bit more, move the ball about quicker, make sure we are getting crosses in to the box and a better end product."

County found themselves reduced to 10 men after loan signing Filip Kiss was sent off for a second bookable offence, but the Killie boss believed the midfielder could have been off earlier.

"The boys were talking about the sending off," Johnston said.

"I think Kiss handled the ball 10 minutes before that at the free kick and maybe should have been sent off then, so we were a little bit disappointed with that."

Heavy rain threatened to turn the pitch into a quagmire but the Rugby Park boss was pleased with the way his side battled back.

"At one point it started to look dangerous," he added.

"The ball started to hold up, but the boys showed tremendous character the way they came back. We were actually disappointed that we didn't come away with a win in the end."