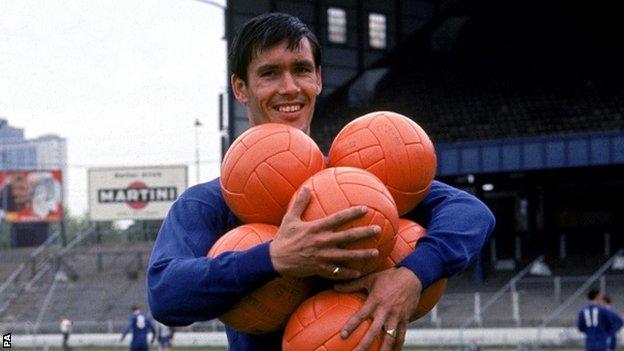 Former Chelsea, Liverpool and Aston Villa centre-forward Tony Hateley has died at the age of 72.

Hateley scored 211 league goals during his career and was a club-record signing for both Chelsea and Liverpool, costing the Blues £100,000 in 1966.

His son Mark was also a striker, playing 32 times for England.

Hateley started his career with Notts County before moving to Villa Park in 1963, scoring 68 times in 127 league appearances.

A Liverpool statement said: "The thoughts of everyone at Liverpool Football Club go out to his family and friends at this sad time."

After his big-money move to Chelsea from Villa, Liverpool paid £96,000 to take him to Anfield for a season and he also spent a year with both Coventry City and Birmingham City.

After two years at Notts County and a final season at Oldham Athletic, he moved to the United States before his retirement in 1974, by which time his combined transfer fees were a record in English football.

Match of the Day presenter Gary Lineker tweeted: "Sorry to hear of the death of Tony Hateley.

"I played with his son, Mark for England, and met Tony. A wonderful football family. #RIP."

Son Mark, who started at his dad's old club Coventry, was prolific at Portsmouth, AC Milan, Monaco and Rangers during the 1980s and 1990s.

is also a professional footballer, currently playing in Poland, after spells at Motherwell and Tranmere Rovers.