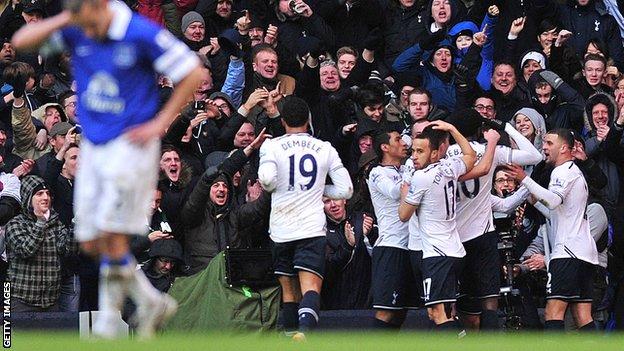 Emmanuel Adebayor struck to sink Everton and give Tottenham an important three points in the race for a place in next season's Champions League.

The ex-Arsenal striker profited from a quickly taken free-kick to drill past Tim Howard and send Spurs up to fifth.

His second-half finish settled a tight contest after Leon Osman had headed over and seen a shot saved, as Everton had the better of the opening period.

Roberto Martinez's side will feel hard done by after Seamus Coleman saw a strong penalty appeal turned down when he went down under Etienne Capoue's lunging challenge in injury time.

While a draw would perhaps have been a fairer result, Tottenham's resurgence under Tim Sherwood continues.

Andre Villas-Boas's successor, who has now won six of his nine Premier League games in charge, owes much to Adebayor, who played only once in the league under the Portuguese this season.

Everton - without their main striker Romelu Lukaku through injury - travelled to White Hart Lane with only one clean sheet from their past 10 league games.

Tottenham have not lost a Premier League game from a winning position this season and have won every league match in which Emmanuel Adebayor has scored.

Despite largely restricting their hosts, a momentary lapse of concentration from Kyle Walker's free-kick enabled Adebayor to score his sixth league goal since Villas-Boas's departure.

Martinez will, however, take positives from Everton's energetic start as Spurs - without a single goal inside the first 15 minutes of any league fixture this season - started typically slowly.

Leon Osman went close on four occasions inside 10 minutes, his best effort a volley which required a smart save from Hugo Lloris, and the midfielder headed over from the resulting corner.

Neat link-up play between Osman, Steven Naismith and Kevin Mirallas threatened to hurt Spurs and Sherwood swiftly stepped off his bench in an attempt to influence his lacklustre side.

Captain Michael Dawson responded by glancing a free header over the bar, but all too often Spurs' first-half attacks became overly intricate and broke down in the final third.

Adebayor came to the fore early in the second period and headed one of his side's nine corners over the bar, before breaking the deadlock in clinical style.

The 29-year-old expertly chested down Walker's set-piece delivery in the 65th minute and fired left-footed past Howard at his near post.

It was Spurs' first shot on target and with the hosts yet to lose a league game from a winning position this season, Martinez summoned Gerard Deulofeu.

Adebayor fired over from range late on, before Coleman appeared to be tripped by Capoue in the area.

But referee Mark Clattenburg waved away the penalty appeal and Everton suffered only their fourth league defeat of the season.

For a selection of images from Sunday's Premier League games go to the BBC Sport Facebook page.