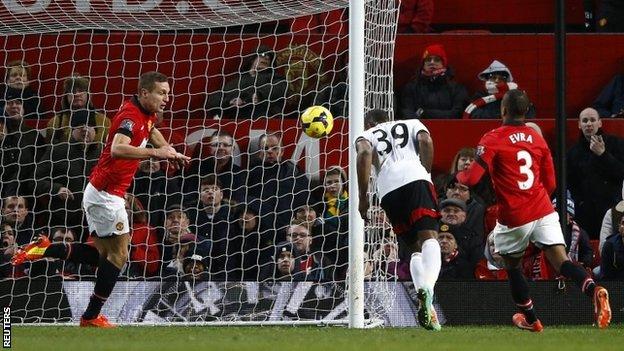 Darren Bent scored an injury-time equaliser to earn Rene Meulensteen a famous result on his return to Old Trafford as bottom-of-the-table Fulham pinched a draw against Manchester United.

After Steve Sidwell had given the visitors the lead against the run of play in the first half, it looked like late goals from Robin van Persie and Michael Carrick had earned United their third consecutive home league win.

But half-time substitute Bent headed in after David De Gea had saved Kieran Richardson's shot to deflate the home supporters and United boss David Moyes, whose side had dominated the game.

For all United's attacking play and 81 crosses, the most by a Premier League team since 2006, Fulham defended heroically as debutant Johnny Heitinga, fellow centre-back Dan Burn and goalkeeper Maarten Stekelenburg excelled.

And though some might say the point was undeserved given Fulham had three shots on target, it represented a significant result for Meulensteen, who had won only three of his previous 11 Premier League games since taking charge in December.

Get it in the box

Manchester United put in 81 crosses in the game, the most by a team in a Premier League match since 2006, but only 18 of them found a team-mate

It was the kind of performance that could galvanise their season, especially since they crashed out of the FA Cup after defeat by League One Sheffield United in midweek.

In contrast, it was another low for Moyes, whose side have already lost five games at Old Trafford this season and now sit nine points behind fourth-placed Liverpool as their pursuit of a Champions League place took a serious dent.

Meulensteen, who was first-team coach under former United boss Sir Alex Ferguson before leaving the club when Moyes took over, watched his side come under pressure from the start.

And their opener came against the run of play as United's defenders failed to pick up Sidwell's run, with the Englishman guiding home on the volley after being found by Lewis Holtby's excellent chip.

Van Persie was denied by a superb Sascha Riether tackle prior to the goal and the United forward should have equalised moments after the opener, when he skied Rafael's cross at the back post.

Urged on by a noisy crowd, with United trying out their singing section again, the hosts continued to bombard Fulham's goal from a succession of crosses. Ashley Young and Carrick went close to scoring an equaliser and Stekelenburg also saved another Carrick effort before Sidwell blocked Van Persie's follow-up.

But as Moyes's side camped in the Fulham half there was always a danger they would be susceptible to a counter-attack.

Fulham had avoided defeat at United only once in 51 years - a 3-1 Premier League victory in October 2003, when Lee Clark, Steed Malbranque and Junichi Inamoto scored for the visitors

The visitors should have gone further ahead when Swedish teenager Muamer Tankovic burst forward on his Premier League debut to play in Richardson, but the former United player scooped over the bar with only De Gea to beat.

Having enjoyed 72% possession in the first half, the hosts strengthened their grip on the game after the break with Wayne Rooney almost connecting with Van Persie's cross before being denied by a superb Stekelenburg save.

With Fulham posing less of a threat, Moyes went for all-out attack by introducing Adnan Januzaj, Antonio Valencia and Javier Hernandez as Rooney dropped into midfield.

The policy was rewarded when Van Persie tucked in Juan Mata's centre after 78 minutes, before Carrick drove in a deflected effort from the edge of the area two minutes later.

That looked like it would be enough but Sidwell again burst forward to play in Richardson, and when his shot was stopped, Bent headed home the equaliser.

For a selection of images from Sunday's Premier League games go to the BBC Sport Facebook page.