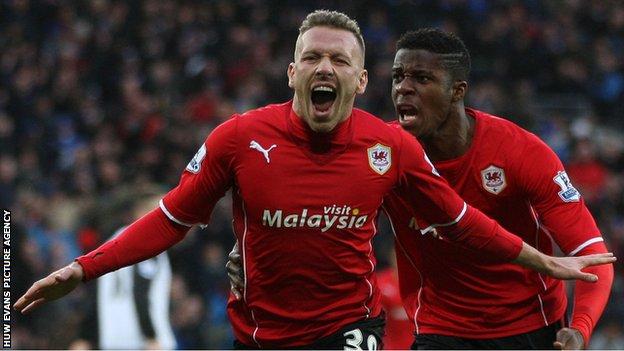 And Bellamy, who started a Cardiff comeback with a goal in the 49th minute, was unhappy with the hostile send-off the player received.

"I've never heard the crowd like that - that's not the club I'm from," he said.

"I've seen them in the first half and I've not seen them like that, I've not been a part of that.

"I've not seem them direct it at individuals before, which they did.

"Maybe it's modern football and I'm trying to get used to that. [But ] It's not like us."

Cardiff were trailing 1-0 and looking ineffectual before the introduction of Zaha for Whittingham, who has been a Bluebirds stalwart since joining the club in January 2007.

However, debutant Zaha - on loan from Manchester United until the end of the season - helped spark the comeback when he set up Bellamy.

And the comeback was complete less than two minutes later when Kenwyne Jones - also making his debut - fired home from short range.

Cardiff survived a torrid last quarter of an hour when goalkeeper David Marshall pulled off one miraculous save from Nathan Redmond and Bellamy headed a Gary Hooper shot off the line.

"We had a good period in the second half when we deserved to get in the lead," said Bellamy.

"But in the last 10, when you haven't won in a while and you're fighting, you have to try and hang in there and that's what we did."

The win lifted Cardiff off the bottom of the table and they are only three points behind Swansea City, who are 15th after their 2-0 defeat at West Ham.

The pair meet in the second South Wales derby of the season at the Liberty Stadium next Saturday.