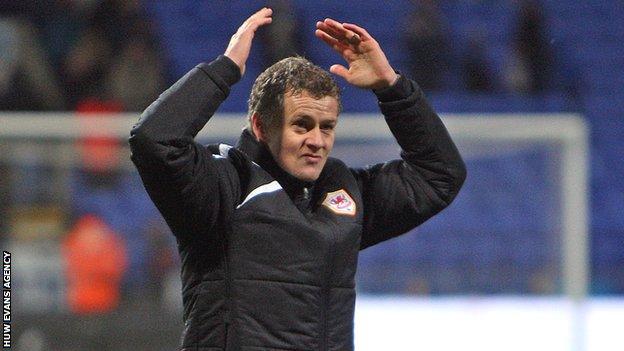 Cardiff City boss Ole Gunnar Solskjaer has called on his players to make history when they play Swansea City in the south Wales derby on Saturday.

The Bluebirds won the first league encounter of the season at Cardiff City Stadium 1-0 in November.

Neither side has completed the league double over their rival, but Cardiff have the opportunity to be the first if they can win at the Liberty Stadium.

"Let's go out and make history. Why not?" Solskjaer said.

"I know about the history of this fixture... I am aware there has never been a league double. This may be the time.

"I watched the south Wales derby on television earlier this season when Cardiff won and the return is going to be another tough match.

"Over the years I have watched the Swans' journey with Roberto Martinez, then Brendan [Rodgers] and now Michael [Laudrup] in charge.

"There is a passion among Cardiff fans which I knew about before and has been evident since I arrived.

"We understand what this fixture means to the fans."

Cardiff claimed a morale-boosting on Saturday to hand Solskjaer his first Premier League win in charge and help his new charges climb off the foot of the table.

Swansea are just three points above their Welsh rivals after losing at West Ham last weekend and the derby has extra significance as the winner will claim a major boost to their hopes of avoiding relegation.