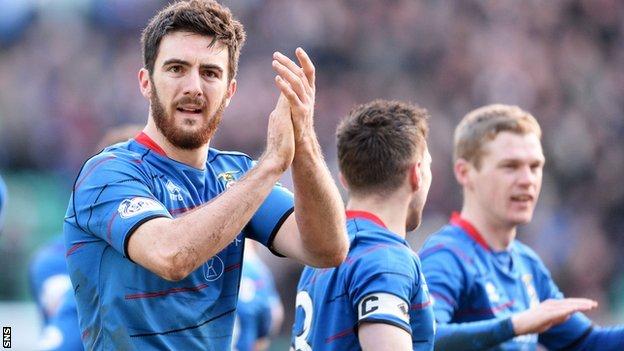 John Hughes insists Inverness can win their Scottish League Cup final against Aberdeen despite being short of two suspended defenders.

Gary Warren and Josh Meekings were sent off in Sunday's semi-final penalty shoot-out win over Hearts.

"First and foremost we're just delighted that we got there," Hughes told BBC Radio Scotland.

"We can adjust. I've got a very, very influential skipper saying to me he can play centre-half in that final."

That captain is Richie Foran, who is currently out injured with a shoulder injury but will hope to be back for the final on 16 March.

Ross Draper netted the crucial penalty after an enthralling 90 minutes which was followed by a tense extra-time period.

Greg Tansey's wonderful strike put Inverness ahead but Jamie Hamill scored twice in two minutes for Hearts after Warren was sent off for a second booking.

Meekings saw red for a challenge on Scott Robinson but the Highlanders still grabbed an injury-time leveller through Nick Ross.

"It was the character and the never-say-die attitude and the spirit," said Hughes.

"It's in the makeup up at Inverness and absolutely delighted for the boys.

If I keep everybody injury-free, we can put a team out there that can certainly win the cup for Inverness.

"Nick Ross has been a regular starter since I've come to the club. We changed it about a bit and put him on the bench, and he goes on and gets the equaliser that takes us into extra time - absolutely delighted.

"I just felt it was a right good game. There was one or two decisions I felt went against us a little bit but the boys showed plenty character and commitment.

"We're down in Edinburgh, 12.30 kick-off, everything against us, full house - all Hearts, yet we're in the final.

"If I keep everybody injury-free, we can put a team out there that can certainly win the cup for Inverness. It's on the day, if you go and perform we can take the cup back to Inverness."