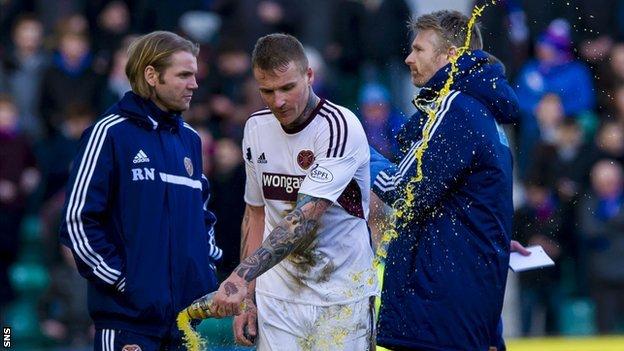 Gary Locke admitted Hearts only had themselves to blame for missing a place in the Scottish League Cup final.

They lost on penalties to nine-man Inverness, who had equalised in the fifth minute of injury-time at the end of the initial 90 minutes.

"You don't get a lot opportunities in cup semi-finals as good as we did today," said Locke.

"When there's a minute to go and they're down to nine men, you should really see the game out."

Greg Tansey's wonderful strike put Inverness ahead but Jamie Hamill scored twice in two minutes for Hearts after Gary Warren was sent off.

After a goalless extra-time, Ross Draper netted the crucial spot-kick.

"We were 2-1 up and there was about a minute left on the clock and we have a corner; instead of trying to keep it in there, we try and hit it off one of their defenders, and then they go right up the park and score.

"When we get to extra time with a two-man advantage instead of running the ball, we've got to make sure we move it quicker than we did, and then when we did get into good areas the final ball let us down."

"It was a disaster for us and we are really hurting in the dressing-room."

"I felt we showed a lot of character to come back into the game. We go a goal down and then come back and get ourselves in front, and at times, I thought we played some decent stuff. But unfortunately, we made an error at the end and it has cost us badly."