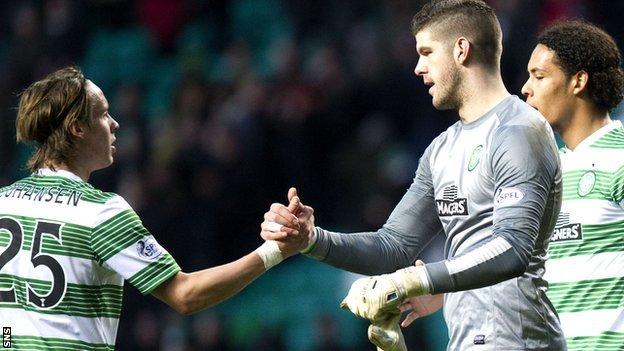 Kris Commons' 22nd goal of the season was the difference as Celtic secured a 1-0 win.

"It's testament to him and the players in front of him," said Lennon.

"There's a real edge and incentive for them to keep the run going. He wasn't overly worked today but what he had to do he did very well.

The Celtic manager put talk of the abuse he suffered at Tynecastle on Saturday to one side as his team successfully stretched their lead at the top of the Premiership to 21 points.

"I thought we were superb, our football was very, very good. We had 19 attempts on goal and only four on target, so that's the only criticism you could have of the team today.

"It was a very good all round footballing performances and we deserved much more out of the game."

We had 19 attempts on goal and only four on target, so that's the only criticism you could have of the team today.

However, transfer deadline day signing Leigh Griffiths had to sit in the stands as he was not registered before 17:00 GMT on Friday, meaning he was not eligible to play this weekend.