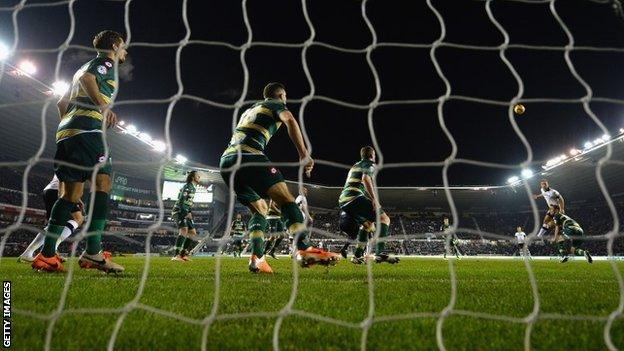 Derby moved to within a point of third-placed Queens Park Rangers as they earned a battling Championship victory against their promotion rivals.

The Rams took the lead midway through the first half when John Eustace's header looped in after Rob Green had miscued a punch clear from a corner.

And despite a series of late chances for the visitors, Derby hung on.

The hosts' form at the iPro Stadium has been the cornerstone of their rise up the table under manager Steve McClaren, who began the season as part of Harry Redknapp's coaching team at QPR.

Six wins in their previous seven home games meant they entered this important fixture full of confidence, and that showed as they started well in what turned out to be a feisty encounter.

The Rams have scored 58 goals in the Championship so far this season, more than any other team in the division

QPR knew a point or more would take them back into the automatic promotion places but they suffered a setback when Eustace pounced to score his first goal since February 2012.

Green's weak punch found its way to the midfielder, who was lurking around the penalty spot, and his well-placed header evaded the QPR defenders guarding the goal line.

England international Green's match almost went from bad to worse when he miscontrolled a simple back pass, but he recovered in time to prevent it dribbling over the line.

QPR rarely posed a threat in the opening period but nearly went in level at the break, only for on-loan defender Hughes to see his back-post header clawed to safety as Grant flung himself to his right.

The visitors were far more dangerous after the interval and it took some desperate Derby defending to stop them forcing an equaliser.

Modibo Maiga was poised to head in from six yards after fine work on the left wing by Joey Barton, but a stretching Craig Bryson managed to flick the ball away from the on-loan West Ham striker.

From the resulting corner Niko Kranjcar's near-post header was goalbound but Eustace threw his head in the way to divert the ball over.

And after substitute Junior Hoilett lashed a left-footed volley into the side netting, Derby were able to celebrate a victory which boosts their hopes of reaching the Premier League for the first time since 2008.

"I knew it would be a test of how far we've come. The team has improved so much. It was about time we had a big win and the clean sheet got us there and that is the most satisfying thing. We should have scored more but the key is to get the balance right between defence and attack.

"We hadn't beaten a top-six side before this and we've got to show more consistency when we come up against our rivals. We're still thinking about the play-offs and being ahead of the team in seventh position. That's our target at the moment as the teams above us have all the experience."

"We didn't create nearly enough chances, that was the problem. We didn't press them in the first half and we seemed more worried about them.

"We were better in the second half but we didn't created enough."

Talking about Manchester United youngster Will Keane, who is on loan at Loftus Road but has yet to feature, Redknapp added: "I'm looking forward to seeing young Will now, he's a good player and he will get a chance.

"It's an area we might be a bit short in but I still feel we have a big chance [of promotion]."