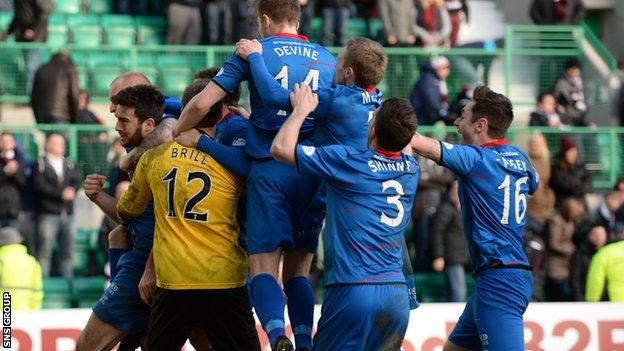 Inverness Caledonian Thistle will mark the 20th anniversary of their first outing this summer and they may well be able to celebrate with a first major trophy.

Ross Draper knocked in the crucial spot-kick to settle and send the Highlanders into the Scottish League Cup final.

And, next month, as he leads his side out against Aberdeen at an as yet undecided venue.

We might not know where their first final will be played, but we can tell you a few things about Caley Thistle...

Given the team's subsequent rise to Scotland's top flight, the merger between Thistle and Caledonian was a smart move. However, the birth of the club was far from plain sailing, with bitter feuding and accusations of vote-rigging tearing the local football community apart.

With the Scottish Football League expanding from 38 to 40 teams for season 1994-95, it was suggested that the city's three Highland League teams get together to campaign for a spot in the senior ranks.

Clachnacuddin, who remain in the Highland League, quickly dropped out, so it came down to the members of Caley and Thistle to vote - and that's when things got ugly.

Many Caley fans wanted to go it alone and diehards on either side were dead set against the idea. Membership of both clubs rocketed as votes were cast, with the go-ahead passing by a slim majority in December 1993. However, it was four months into their inaugural season before a narrow 54-46% vote finally confirmed that Caley Thistle could survive unchallenged.

Another change of name

Having been accepted by the SFL, along with neighbours Ross County, Caley Thistle kicked off with a 5-2 win over Arbroath and finished their debut season sixth in Division Three.

They improved by three places in the following campaign before the 'Inverness' was added to their name at the request of the local council, who had contributed funding for a new stadium.

The Caledonian Stadium, in the shadow of the Kessock Bridge over the Moray Firth, was opened in November 1996, with the team having previously played at Caley's Telford Street Park.

There was to be another temporary switch to Aberdeen's Pittodrie Stadium when the Highlanders eventually won promotion to the top flight since the regulations at the time demanded 10,000 seats.

Adding 'Inverness' and moving to a new home paid off straight away, with the team being crowned Third Division champions in 1997.

Other significant silverware includes the First Division trophy for 2003-04 and 2009-10 and the Challenge Cup in 2003, when David Bingham and Steve Hislop were on target in a 2-0 win over Airdrie United at McDiarmid Park.

The club may have just secured a place in their first major cup final, but Caley Thistle have made a splash in national knock-out competitions before.

A stunning 3-1 Scottish Cup win at Celtic Park in 2000 prompted the famous newspaper headline: Super Caley Go Ballistic Celtic Are Atrocious. And they repeated the trick in the same competition three years later with a 1-0 home win.

While in the First Division, Caley Thistle lost out in the semi-finals of the Scottish Cup in successive seasons, losing the second of those ties after a replay with Dunfermline Athletic.

And Sunday's nine-man win over Hearts was revenge for last year's disappointment in the same competition, which went the other way after penalties.

John Hughes, appointed in November, is the club's seventh manager.

Sergei Baltacha, a European Cup Winners' Cup winner with Dinamo Kiev, was the first man in the dugout and the shortest-serving boss, lasting only one year.

His successor, Steve Paterson (August 1995 - December 2002), is the longest serving, while Craig Brewster enjoyed it so much he had two turns.

A man for all seasons

Charlie Christie managed the club for 19 months between Brewster's spells in charge and has thoroughly earned the title 'Mr Inverness Caley Thistle'.

He played for both Caledonian (twice) and Thistle before going on to make more than 300 appearances in 10 years for Caley Thistle.

Christie was a first-team coach and lottery manager prior to replacing Brewster, initially on a caretaker basis, and continues now as the club's head of youth development.

Not many local lads

Quite a few of the present team may struggle with Christie's accent, since the squad, assembled by previous manager Terry Butcher, has been recruited from far and wide.

Of the 16-man squad at Easter Road, only stoppage-time goal-hero Nick Ross was brought up in an IV postcode, with the majority of players recruited from the lower leagues in England.

Billy McKay is making a name for himself as the 'Nessie Messi' thanks to his goalscoring exploits, but several others of note have starred in the red and blue of Caley Thistle.

Scotland midfielders Barry Robson and Don Cowie spent time at the club, Andrew Shinnie was capped before moving on to Birmingham City last summer and Romanian Marius Niculae led the attack during season 2007-08.

Caley Thistle's first competitive game was a 2-0 Coca-Cola Cup victory away to East Stirlingshire on 9 August 1994, with Wilson Robertson scoring their first goal, and they followed that by hammering Arbroath 5-2 in that first league game at Telford Street.

Their first league game at the new Caledonian Stadium came on 9 November 1996, with Albion Rovers' Dave McKenzie scoring the first goal in a 1-1 draw.

Iain Stewart, a striker signed from Highland League side Lossiemouth, is their top scorer in a single season with 29 goals in season 1996-97.

Caley Thistle's best league result was a 7-0 win away to Ayr United in April 2010, while Annan Athletic were their victims by 8-1 in January 1998 as they recorded their best cup victory.

However, the Highlanders might want to avoid playing on 22 September ever again. Their record league defeat - 6-0 by Airdrieonians - came on that day in 2001, while their worst cup result was exactly nine years later by the same scoreline against Celtic.