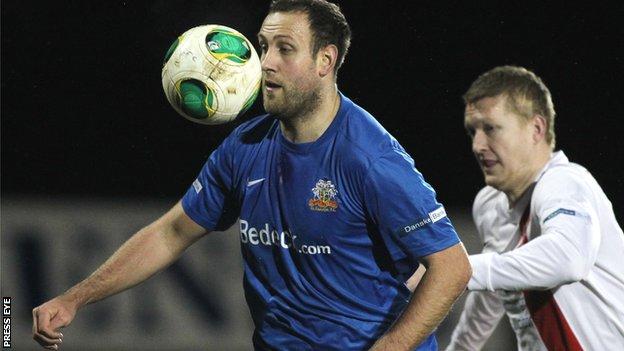 Craig McMillen hit the woodwork as Ards made a bright start but the hosts broke the deadlock when Kris Lindsay fired past Alan Blayney on 30 minutes.

Guy Bates netted from close-range and Mark Patton sealed the win with a stunning strike two minutes from time.

Ards were the better team in the opening stages at Mourneview Park and Conor Downey saw two shots deflected wide after McMillen fired against a post in the second minute.

Lindsay's opener came against the run-of-play, with the defender shooting low and hard beyond Blayney after the visitors failed to clear a Brian McCaul cross.

The response was quick, for eight minutes later the strugglers equalised with a quality goal, Cleary supplying a delightful chip from 18 yards.

Tiarnan Mulvenna almost restored Glenavon's advantage on the stroke of half-time when his shot from a tight angle flew just wide.

The Lurgan Blues made a perfect start to the second half as Bates pounced on the loose ball to score on 47 minutes after Blayney parried a McCaul shot.

Andy McGrory was next to miss out, blazing over at the backpost after Lindsay flicked on from Shane McCabe's free-kick.

Substitute Patton showed how to find the net with a sweet 20-yard shot which flashed past Patton.

The win moves seventh-placed Glenavon to within two points of Ballymena United while Ards remain 10 points adrift at the bottom.

The fixture was rearranged for Monday night after being called off on Saturday because of a waterlogged pitch.