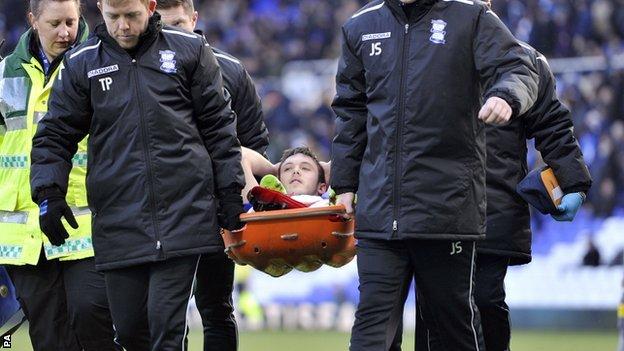 Birmingham City's on-loan defender Tom Thorpe has returned to Manchester United for treatment after being injured on his league debut.

After being signed on transfer deadline day, 21-year-old Thorpe went straight into the Blues line-up for Saturday's home game against Derby County.

But he only lasted 14 minutes before being stretchered off with an ankle ligament injury.

"We were absolutely delighted to get someone of his quality. Manchester United rate him so highly and he's been a brilliant lad."

When Federico Macheda came on as a sub for Birmingham City against Derby County on Saturday, he became the 40th player to play for Blues, in all competitions, this season.

He will remain in United's care for the foreseeable future to receive further treatment at their Carrington training ground.

Thorpe, who was signed on an emergency loan for the rest of the season, was one of five City debutants in Saturday's 3-3 draw - the most since six Blues players (Boaz Myhill, Steven Caldwell, Chris Burke, Morgaro Gomis, Adam Rooney and Chris Woods) all made their debut, also at Derby, under Chris Hughton, in August 2011.

Thorpe was then replaced by another deadline day signing, Aaron Martin, and a third Manchester United youngster, Federico Macheda, came off the bench to score a last-gasp equaliser as Birmingham came from 3-1 down to claim a point.

It was only their second point in five Championship games since the turn of the year, putting them six points clear of the relegation zone ahead of Saturday's trip to 22nd-placed Charlton Athletic.