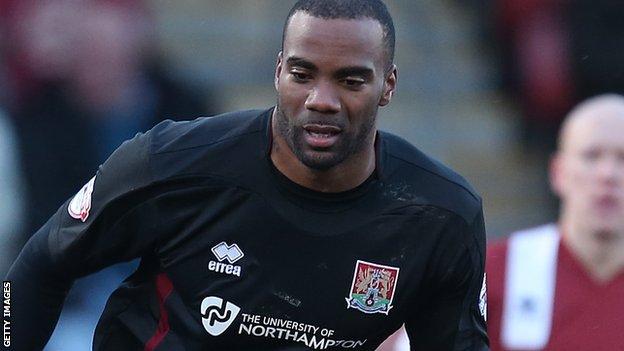 Northampton Town striker Emile Sinclair says he will use his spell with League Two's bottom side to show people he is good enough to play at a higher level.

The 26-year-old joined on loan from Crawley on Friday in a deal which will be made permanent in the summer.

Sinclair told BBC Radio Northampton: "I want to come here and help Northampton get out of the situation they're in.

"I've got a point to prove to myself and the football world I can play at the higher level."

"I'm coming here confident - I'm always confident when I step onto the pitch, and I'll hopefully start scoring goals from next week."

A second half substitute, Sinclair brought a new energy to the Cobblers attack.

Quick and neat on the ball, he showed good awareness and may prove to be a very shrewd transfer-window signing.

The fact that the previous day had been such an uncertain one for him - he didn't know he was moving from Crawley until almost the last minute - made his contribution all the more encouraging.

Sinclair made his debut from the bench in Northampton's 1-1 draw at Cheltenham, which leaves the Cobblers six points from safety in League Two.

He will compete with Gillingham loanee Antonio German and new signing Alan Connell for a starting place, whilst Roy O'Donovan also remains with the club after his proposed move to Brunei DPMM fell through.

"As soon as I came on, I thought Antonio and I linked up really well together," said Sinclair.

"Hopefully we can build a relationship and start scoring some goals together, and start getting some points."

Meanwhile, Saturday's goalscorer Matty Blair says the arrival of Chris Wilder as manager has had an immediate impact.

"The standards always go up when a new manager comes in," said Blair.

"Everyone wants to impress. New faces come in so you've got to do your best and give him no excuse to leave you out of the team.

"I thought we looked solid and that'll only get better working with the new manager in training and games. Hopefully we'll get stronger as the season goes on now."