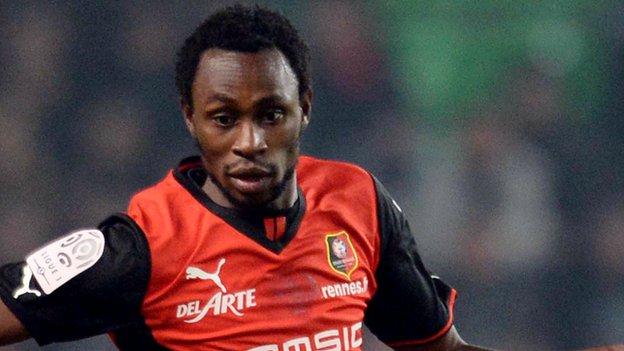 Burkina Faso international Jonathan Pitroipa insists he will not dwell on his failed transfer to Stoke from Rennes on deadline day.

The Premier League side and the French Ligue 1 club agreed a loan deal with an option to buy but the deal fell through at the last minute.

"It was very close but maybe it wasn't meant to be," Pitroipa told BBC Sport.

"England would be a good place to play in the future, but right now I have to forget what happened last week."

Pitropia's agent and club intermediaries have been criticised in some quarters over the collapse of the deal.

But the 27-year-old, who has made 23 appearances this season for Rennes, said: "There were hiccups at the last minute but it was not due to my agent that I didn't move to Stoke.

"England is a good country to play football, people follow the league around the world and it is also big in Africa. People say it was going to be another step for me unfortunately it didn't happen.

"But it is important to look forward and not worry about what could or should have been."

Pitroipa joined Rennes in 2011 and finished last season with seven goals, helping the club to reach their first French League Cup final, where they lost to Saint-Etienne.

He has only one year left on his contract and has not ruled out a move to the Premier League, while there are also reports he could move to Russia.

"Things happen very fast in football, I don't really know what the future holds, I just have to keep my head and we'll see," he said.

Pitroipa was named player of the tournament at the 2013 Africa Cup of Nations in South Africa, helping Burkina Faso surprise everyone by reaching the final where they narrowly lost to Nigeria.

He scored three goals in World Cup qualification as the Burkinabe failed to reach Brazil by losing to Algeria in the final play-off.