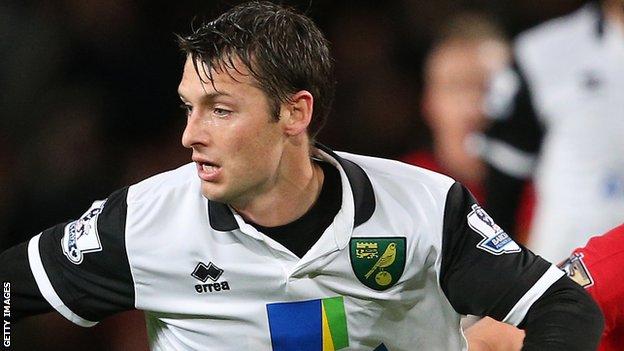 Norwich City boss Chris Hughton expects Wes Hoolahan to quickly put the disappointment of not being allowed to leave the club behind him.

The 31-year-old midfielder after an offer for him from Aston Villa.

"He's a good player. There's no doubt about that. We know what Wes brings us," Hughton told BBC Radio Norfolk.

"I would very much expect him to knuckle down. He's a good professional and a line has been drawn under it."

Hoolahan is in his sixth season at Norwich, having played 206 times and scored 35 goals

Hoolahan, who has 18 months to run on his contract with Norwich, has played 13 games this season, but only once since the turn of the year.

Former Canaries boss Paul Lambert attempted to take the Republic of Ireland international to Villa during last month's transfer window, but the offer was rejected, as was the player's request to leave.

Hoolahan was not involved in the matchday squad that lost on Saturday.

"He is contracted to the club and won't be the first player that has wanted to go and when it hasn't happened, knuckled down and got on with it," added Hughton.

"It's not a question of anybody being disruptive. It's simple, an offer was made for him, he wanted to go and put in a transfer request and it didn't happen.

"The transfer deadline has gone and at this moment he is still very much a Norwich City player. What he wants to do most is train well, play games and be involved and that doesn't change."