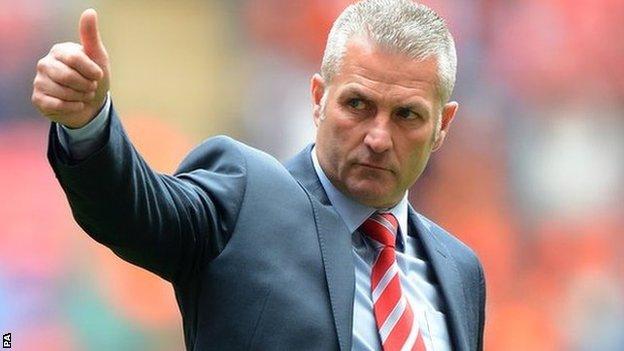 Gateshead boss Gary Mills believes Saturday's has given his squad confidence to push for promotion from the Conference Premier.

Three second half goals, before a late Harriers consolation, secured a 3-1 win that kept Heed fourth in the table.

Mills told BBC Newcastle: "I thought we were unbelievable from start to finish and showed real bravery on the ball.

"When I came in, I wanted everyone here to believe that we could win promotion - I think they're starting to now."

The reverse fixture took place on the opening day of the season and Gateshead, then managed by Anth Smith, went down by the same scoreline.

But Mills has overseen a remarkable turnaround at the club, lifting the Tynesiders from 19th place when he was into promotion contention.

They are now unbeaten in nine matches, although six of those have been draws.

"Regardless of conditions and situation, we've stuck to our style of play and I'm delighted with that," added the 52-year-old.

"The players have ridden any little knock backs and have the bit between their teeth. The feeling around the club is that we'll give promotion everything we've got."