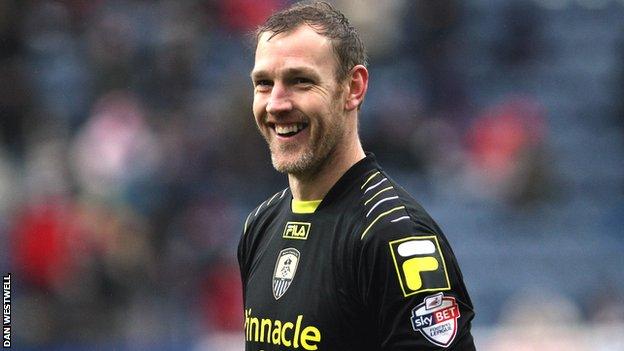 The 39-year-old produced an impressive performance at Deepdale in his first competitive game since March 2013.

Derry said: "When I'm talking about people and having a true passion and an appreciation for the football club, he set a standard on Saturday.

"I want others to follow and realise what it really means to play for us."

Pilkington was drafted into the line-up following the late withdrawal of Bartosz Bialkowski because of illness.

The former Manchester United trainee first joined the Magpies in 2005 and, after time with Mansfield Town and Luton, he returned to Meadow Lane as goalkeeping coach.

Saturday's match was his 151st appearance in a Notts County shirt.

"I thought the best player on the pitch was our 39-year-old kit-man and goalie coach - he was absolutely unbelievable," added Derry.

"He's an absolute top guy for doing what he did on Saturday and he was brilliant.

"Bart had come in that morning and he'd had a terrible night, with no sleep and couldn't play.

"We didn't have anyone else on the pitch and it was Pilks and he came up trumps for us."