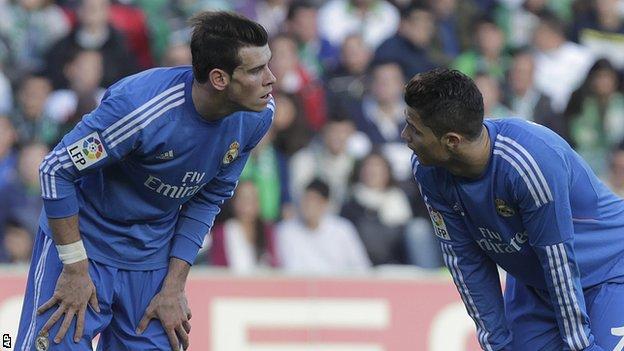 Cristiano Ronaldo has been banned for three league games after being sent off against Athletic Bilbao on Sunday.

But the Portuguese forward is clear to play in Wednesday's Copa del Rey semi-final against Atletico Madrid.

Gareth Bale, who missed the Bilbao match with injury, is also available for the first-leg tie at the Bernabeu.

Ronaldo received a one-game ban for the straight red card after clashing with Athletic's Carlos Gurpegi, and two more for gesturing as he left the field.

He will be ruled out of the La Liga fixtures against Villarreal, Getafe and Elche unless Real decide to appeal.

Carlo Ancelotti's side host Diego Simeone's men in the Copa on the back of a 22-match unbeaten run.

Atletico won at the Bernabeu in September, but Real have not lost since defeat at Barcelona on 26 October.

"A different Real Madrid will play to the team that played Atletico in the league," said Ancelotti.

"I think we are playing well and are confident at the moment. We are balanced but we could still improve. I'm happy with the team."

Bale, 24, has missed Real's last two matches with a calf injury, making only 13 appearances in La Liga after being hampered by injuries in his debut campaign.

But the Welshman has still managed to score 10 goals in all competitions for Los Blancos.

Spain striker David Villa is a doubt for La Liga leaders Atletico after suffering a thigh injury during Sunday's 4-0 win over Real Sociedad.

The semi-final is a repeat of last season's final, when Atletico won 2-1 in a stormy encounter - with then-Real boss Jose Mourinho sent off - at the Bernabeu.

Both clubs have been successful in Spain's premier cup competition, with Atletico having won it 10 times and Real on 18 occasions.