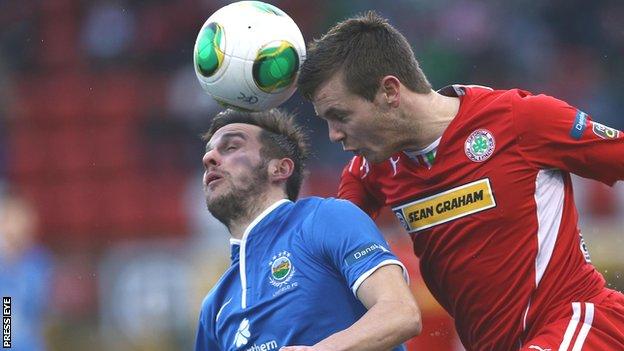 Cliftonville defender Jaimie McGovern is suspended as the Reds bid to go top in Tuesday night's Premiership tussle with Ballymena at the Showgrounds.

The league champions lie two points adrift of leaders Linfield after beating the Blues 1-0 on Saturday.

Ballymena are missing key duo David Cushley and Allan Jenkins for the game, with both serving bans.

The Ballycastle Road match was rearranged for Tuesday after being postponed because of a waterlogged pitch on 24 January.

Both teams also had their Premiership fixtures on Saturday called off after more heavy rain.

Coleraine are ahead of the Mallards on goal difference with the pair occupying the two places above basement side Ards.

McGovern played in Saturday's pivotal win over Linfield at Solitude, which gives Tommy Breslin's team the chance to go a point clear with a victory.

New signing Jude Winchester could make his first start for the Reds after coming on as a substitute against Linfield.

Cliftonville have beaten the Sky Blues 1-0 and 2-1 in the two meetings between the sides this season.