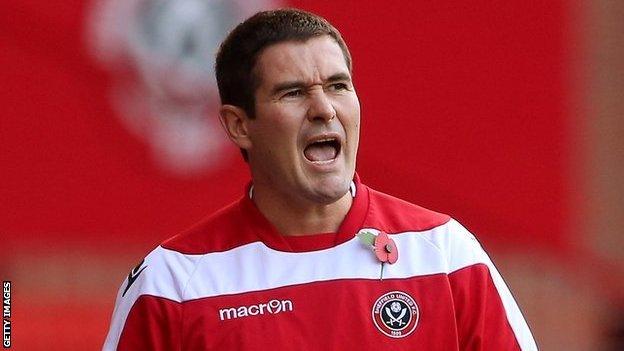 Sheffield United manager Nigel Clough has admitted beating Shrewsbury next Saturday is more important than knocking Fulham out of the FA Cup.

The Blades slipped back into the League One relegation zone after losing 3-0 at Crewe on Saturday.

It hasn't happened very often, but for eight or nine to be off it, as they were, we'll have to try and find out the reason

He told BBC Radio Sheffield: "Going through would mean nothing unless we start winning in the league."

The United manager admitted he had been taken aback by his players' performance at Gresty Road.

"Whether it was physical or mental, it just seemed to catch up with a few people on Saturday," Clough said. "It was strange, because people who've done so well for us, like Jose Baxter, Ryan Flynn, Jamie Murphy - maybe it just caught up with them, it was a game too many.

"We have to get it out of our system ready for Fulham and, more importantly, the Shrewsbury game next Saturday.

"We'll have a meeting and have a frank and open discussion about it. It hasn't happened very often, but for eight or nine to be off it, as they were, we'll have to try and find out the reason.

"When you look at the way we've started games recently, even away from home, with a vibrancy, an urgency and intensity, it was lacking on Saturday."

United still have games in hand on the teams around them at the bottom of the league, but Clough believes any advantage in that respect could quickly evaporate.

"We have 19 more league games and at least one cup game to put things right," he explained. "And we've still got the games in hand, but they can quickly go - and losing to teams around you, like we did to Notts County, hurts you even more. It makes Shrewsbury on Saturday an even bigger game.

"But we can go to Fulham and have a real go, as we did [against Aston Villa] at Villa Park in the third round."