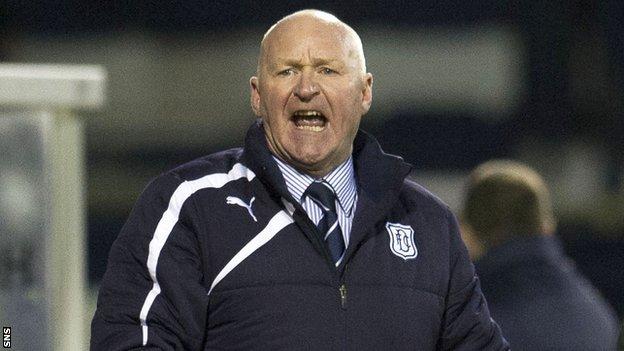 Dundee have confirmed that they have parted company with manager John Brown despite the 52-year-old's side sitting second in the Scottish Championship.

It follows talks with the Dens Park board to agree a severance package.

After many fans voiced their anger at a run of three games without a win during which they lost the league lead.

Dundee said: "The club agreed with John's expressed view that after recent results this is the best way forward."

It is understood that Paul Hartley, the former Scotland midfielder who is looking for a job after quitting last month as manager of Alloa, would consider the position at Dens Park.

However, no approach has been made to Hartley by Dundee.

In a statement on their official website, Dundee stated: "The club expects to move quickly to appoint a new manager, to continue the good work by the management and players to date and to and get us over the line as champions in May."

The Dark Blues are level on points with leaders Falkirk, who have a superior goal difference, in the race for the title and the one automatic promotion spot.

Dundee lavished praise on the job done by Brown, who signed a two-year contract with Dundee last February with his new charges sitting bottom of the Scottish Premier League.

"Dundee FC and manager John Brown have today announced they are to part company by mutual agreement," added their statement.

"John stated that he has loved his time at Dundee FC as a player and as a manager.

"He still passionately wants Dundee FC to win the league this season and would share in our pride if we go on to do so.

"The board of directors would like to put on record their thanks not only for his valiant efforts in attempting to keep us in the Premier league last season, when no-one gave us a chance, but also for his hard work and diligence in achieving the current points total, which sees the club joint top of the league with 14 games of the season to go.

"His work with the youth teams has also seen a dramatic turn-around in the club's fortunes with the reserves team also second place and a number of our youths in the running for national honours."

Shortly before taking charge of Dundee, Brown was in the news for being part of an aborted attempt to buy Rangers.

His appointment at Dens Park was initially unpopular with a section of fans, who cited that his only previous managerial experience was with Clyde.

Despite an upturn in results, Brown was unable to save Dundee from relegation.

He offered to resign in the summer after being left angry at a touchline ban imposed by the Scottish FA but was persuaded to stay following a meeting with Dundee chief executive Scot Gardiner.