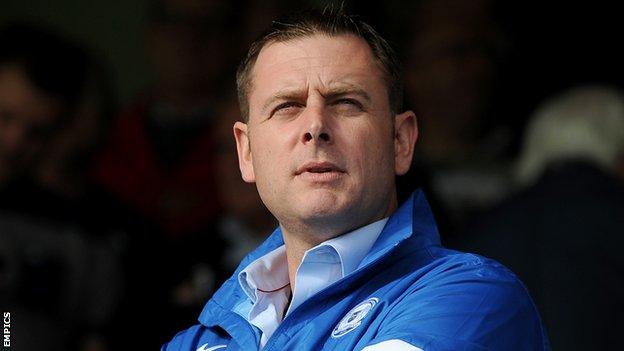 Peterborough United chairman Darragh MacAnthony has said the last three months have been among his toughest times at the club.

Posh started November third in League One but are now seventh and in their last game.

"With the capitulation against Oldham, it's been a really rough spell. It's been a tough transfer window."

After losing just one of their first 13 league games of the season, Posh have won four of their last 16 in League One to seriously dampen their ambition of an instant return to the Championship.

Only 5,297 came to watch Peterborough's most recent Saturday home game - a 3-0 win over Tranmere - compared to 6,956 at their last Saturday game in October, which was a 1-0 win over Shrewsbury.

And attempts to strengthen the squad in January looked to be floundering with approaches for strikers Scott Hogan, Joe Lolley and Rhys Murphy all failing.

But the and then the deadline-day have raised spirits around London Road.

And MacAnthony has said loan deals are lined up with a forward to replace Lee Tomlin, who has and a midfielder.

"One will be a Premier League club's number-10-style player," said MacAnthony, who has been Posh chairman since September 2006.

"They've got a cup game to get through first and then they've told us we can have him until the end of the season.

"The other player will be a loan with a view to a permanent."

The forward is likely to come from Fulham, as they are the only Premier League side with an FA Cup replay this week.