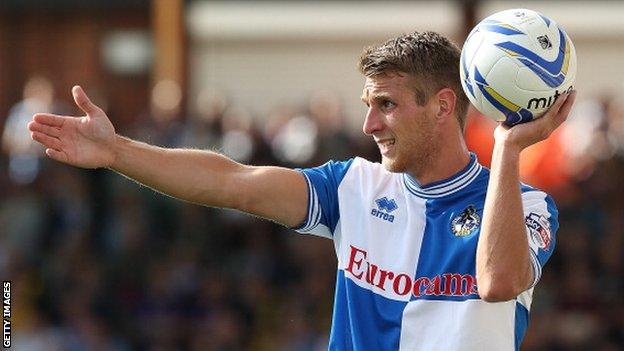 Bristol Rovers defender Lee Brown has admitted he and his team-mates are letting supporters down with some of their performances this season.

Brown delivered the stark assessment in the wake of the side's 3-1 League Two defeat by Chesterfield.

"Fans travelled three-and-a-half hours and we put on that performance. It's just not right," the 23-year-old said.

"The players need to look at themselves because it's definitely the players' fault at the moment."

Rovers have only won seven of their 28 league games this season and are currently fourth from bottom, one point above the relegation zone.

After two successive losses, they host third-placed Oxford United at the Memorial Stadium on Saturday.

"Every player has to manage himself," Brown told BBC Radio Bristol. "I've personally got to manage myself and others have to manage themselves to make sure they give themselves the best chance of being consistent.

"We are definitely looking over our shoulders. It's nowhere near good enough.

"This club isn't a Conference club, we can't let that happen. It's no time to be shirking."