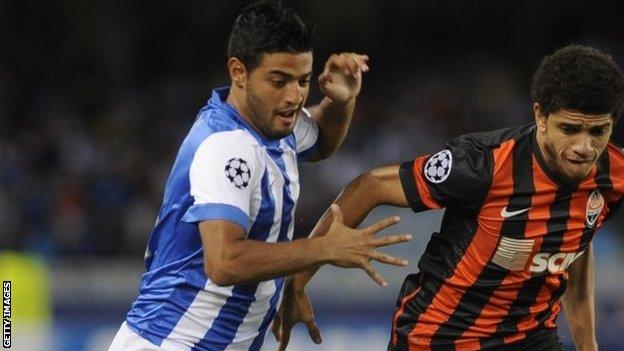 Mexico forward Carlos Vela will not be available for World Cup selection this summer, according to his national football federation.

The 24-year-old has scored 10 goals for Real Sociedad this season but has not played for his country since 2011.

The former Arsenal player's decision to make himself unavailable for Brazil 2014 was revealed in a statement on the Mexican federation's website.

"Vela says he is not 100% mentally and emotionally ready," it said.

Mexico coach Miguel Herrera, national team director Hector Gonzalez Inarritu and other federation officials met with the player in Madrid on Monday to discuss his availability.

The striker has scored nine times in 35 international appearances, but his relationship with the national association has been fractured since 2010.

In September of that year, he was suspended for six months after an allegation he and team-mate Efrain Juarez held a party at the team hotel.

Soon after his serving his suspension, Vela announced he would refuse to participate at the 2011 Concacaf Gold Cup, and also said he did not want to be selected for the 2012 Olympics tournament, which Mexico won.

Mexico will begin their World Cup Group A campaign against Cameroon on 13 June.