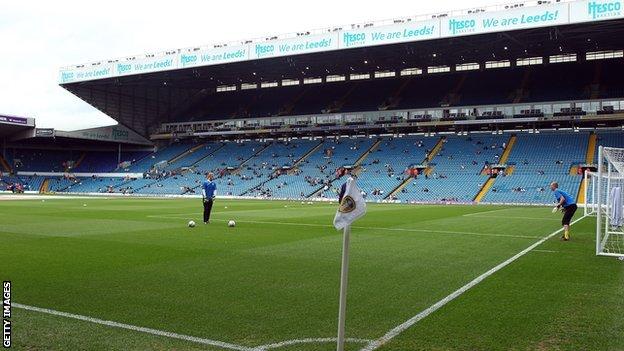 Leeds chairman Salah Nooruddin has insisted that GFH Capital remains the club's owner - as the group prepares for fresh takeover talks on Tuesday.

Italian Massimo Cellino has agreed to buy a 75% stake in the club but has yet to receive Football League approval.

Now talks are planned in London with another interested party.

The Sport Capital and Together Leeds consortiums have teamed up to buy the club, dismissing Cellino's bid and promising to match his offer.

The latest development is yet another twist in the ongoing saga surrounding the ownership of the mid-table Championship club.

It follows the reinstatement of Brian McDermott as the club's manager after the controversial Cellino, who also owns Serie A club Cagliari, attempted to sack him on Friday.

It also comes after Chris Farnell, the lawyer working for Cellino, was escorted from Elland Road on Monday by managing director David Haigh, director Salem Patel and security staff.

Nooruddin has also issued an email to Leeds United staff in an attempt to bring some clarity to the situation and informing them not to take instructions from anyone other than GFH.

Brian McDermott on the weekend's events

"I got a phone call Friday night from the football club, Chris Farnell (a lawyer representing Cellino), to say I'd been relieved of my duties and a letter was on its way. Saturday morning I got another phone call from GFH to say that wasn't the case. A couple of statements came out and I've been speaking to the LMA, so we've now got to this stage where I'm sitting here again."

McDermott 'will not walk away'

"You will all, of course, be aware of the speculation surrounding the ownership of Leeds United FC and I wanted to let you know that GFH Capital currently retains its ownership of the club," wrote Nooruddin.

"The existing board remains in control of the club and David [Haigh] is the managing director.

"No instructions or directions whatsoever should be taken from anyone outside the existing management structure and the board.

"Please do not hesitate to contact me or any senior member of staff should any issues arise.

"With thanks as always for your support. We all look forward to ending the current round of speculation and to marching on together as Leeds United FC."

Adam Pope, the station's Leeds United commentator, added that GFH insists the club will not go into administration while it is in charge.

A proposed takeover by Sports Capital, which involves Haigh and Andrew Flowers, the managing director of club sponsor Enterprise Insurance, fell through last week because of a lack of financial backing.

Following his reinstatement, McDermott told a news conference on Monday he would not walk away from the club, despite the weekend of uncertainty over his future.

"Some people in the game said to not go back, but there's no way I could leave the staff and supporters," he said.

Cellino has previously said he completed a deal to buy 75% of Leeds on Friday lunchtime.

Meanwhile, Leeds City Council leader Keith Wakefield has written to the Football League to voice his dismay at the series of events, which he described as "bizarre" and "a debacle".