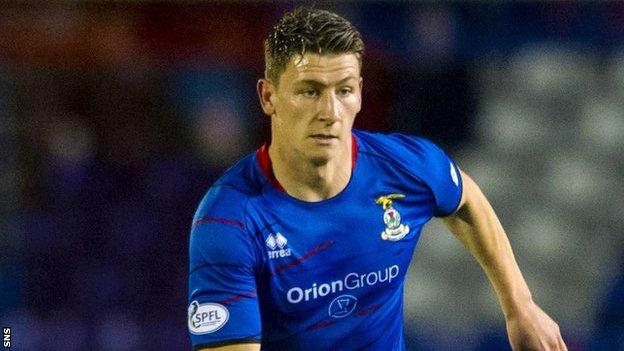 A full appeal is expected to be lodged with the Scottish FA on Tuesday, with the case being heard on Thursday.

Meekings was sent off for a foul on Scott Robinson moments before Nick Ross scored a stoppage-time equaliser.

A two-match suspension for violent conduct would rule the Englishman out of the 16 March final against Aberdeen.

There is no hiding it, Gaz was in tears in the changing-room because it means a lot

after also being sent off by referee John Beaton against Hearts.

The Englishman was booked for a block on Hearts' double goalscorer, Jamie Hamill, and a foul on Sam Nicholson before his side fought back for a 2-2 draw that sent the game into penalties at Easter Road.

Midfielder Ross Draper, who scored the crucial penalty that sent Inverness into their first major final, was critical of both red card decisions and thought Hearts had committed equally bad offences.

"I think both are harsh, especially Josh's - he just tripped him up," he said.

"The ref said Gaz pulled him back, but it was just a body check. There were a lot of worse tackles.

"They have got a hard job, but consistency-wise, maybe they should have had one as well."

Draper had words of sympathy for Warren, who was out of the final the minute he picked up his first booking of the game.

"Gaz is gutted," said the midfielder. "There is no hiding it, he was in tears in the changing-room because it means a lot and he has been brilliant all the way up to the final.

"In every cup game, he has been our best player. Without him, you could argue we wouldn't be in the final.

"It's harsh rules, he was out with a booking because he got booked in an earlier round."