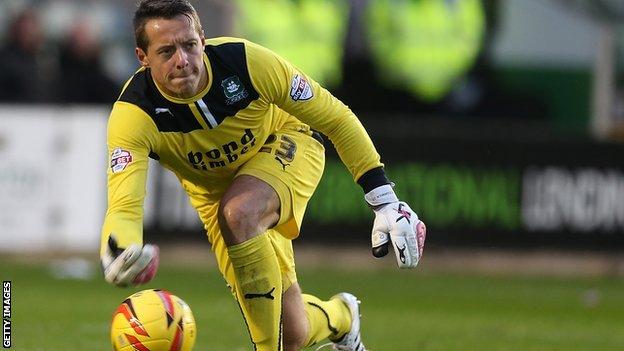 Plymouth Argyle are seeking specialist advice to determine how long goalkeeper Luke McCormick will be sidelined with an injured finger.

The League Two club confirmed the 30-year-old faces a "lengthy lay-off" with a fractured and dislocated finger.

He was forced off in the second half of Saturday's draw with Mansfield after a clash with Stags player Sam Clucas.

"It's obviously worse for him because he is a goalkeeper," Argyle physiotherapist Paul Atkinson said.

"If he was an outfield player, we might be able to strap up the injury and he would be able to carry on playing."

McCormick, who re-signed for a second spell with the club in May and has started 27 games this term, was treated during the game and has since seen a consultant.

"The consultant has asked a colleague, who is the specialist on hand injuries in the south west, for his opinion," Atkinson told the club website.

"Luke will be seeing him on Wednesday. After that, we will be in a better position to give a more precise time-frame for treatment and recovery."

Jake Cole came off the bench to replace McCormick and was beaten inside 10 minutes when Matt Rhead fired the visitors in front.

However, Lewis Alessandra rescued a point for Plymouth with a 96th-minute equaliser.