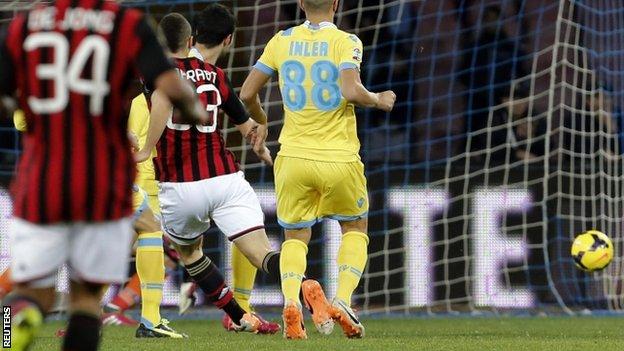 Adel Taarabt scored on his AC Milan debut but ended up on the losing side as Napoli came from behind to win.

Taarabt, on loan from QPR, ran from inside his own half before curling a low shot into the net from 20 yards on seven minutes.

Gonzalo Higuain headed in after the break before sealing the win from six yards late on.

Seedorf replaced Massimiliano Allegri last month after a poor start to their Serie A campaign.

But for much of the game it was Napoli, third in Serie A, who dominated as they look to secure a top-three finish and Champions League qualification for next season.

It was the perfect start for Taarabt though, who scored only his second goal of the season when he drove through Milan's midfield before curling a precise low finish into the net.

His previous goal this campaign came in a 2-2 League Cup draw at Burton while on loan at Fulham.

The Rossoneri were not ahead for long as Inler's shot deflected off Nigel de Jong's shin and into the top corner.

Higuain then had a goal ruled out for offside before Christian Maggio hit the post as AC Milan held on until half-time.

Argentina striker Higuain gave the hosts the lead as he glanced home Inler's left-wing cross and the points were sealed late on as he converted Jose Callejon's low cross.

It proved a frustrating night for Milan striker Mario Balotelli, who appeared to be in tears on the substitutes bench after being withdrawn.

Napoli will face Premier League Swansea in the last 32 of the Europa League on 20 February, while Milan entertain Atletico Madrid in the last 16 of the Champions League on 19 February.

Shots on Target
Home14
Away6