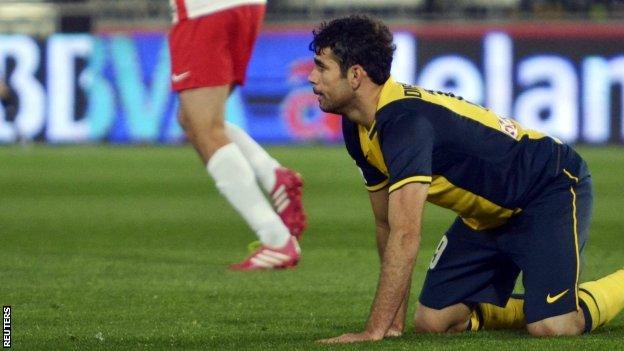 Atletico Madrid were knocked off the top of La Liga by Real Madrid after a disappointing defeat at Almeria.

Diego Simeone's men crashed to their second league defeat of the campaign after two late goals for relegation-threatened Almeria.

Verza's cross opened the scoring with 10 minutes left before the midfielder doubled the lead from the penalty spot.

Atletico goalkeeper Dani Aranzubia was sent off for fouling Sundy Zongo in the build-up to the penalty.

The visitors had made all three of their substitutes, leaving midfielder Gabi to go in goal for the final five minutes on a miserable night for them.

Real Madrid had beaten Villarreal 4-2 earlier in the evening to move level on points with their city rivals.

But, with the chance to return three points clear of La Liga, Atletico produced one of their worst performances of the season to drop below Real on goal difference.

Atletico led La Liga outright for the first time since their double-winning season in 1995-96 after a 4-0 over Real Sociedad on 2 February.

But just six days later, they have lost the advantage with Barcelona also able to move ahead of them with a win at Sevilla on Sunday.

For 79 minutes neither side looked capable of scoring, until Almeria's Aleix Vidal had a shot from the edge of the area hit both posts.

The visitors failed to heed the warning and were behind a minute later when Verza whipped in a cross from the left wing, and the ball went over Aranzubia and into the net.

To seal a miserable night for Atletico, Aranzubia received a harsh red card for pulling back Zongo after his clearance had hit the striker.

And, with makeshift goalkeeper Gabi going the wrong way, Verza made sure of victory from the spot.