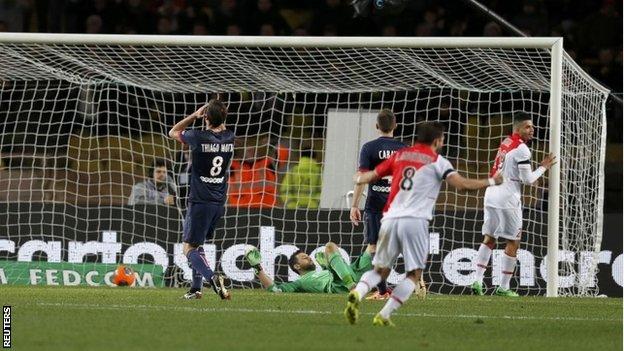 Paris St-Germain retained their five-point lead over Monaco at the top of Ligue 1 as they played out a draw.

The visitors took an early lead when Javier Pastore nodded home at the back post from close range.

And it looked like they were going eight points clear until Thiago Silva turned Fabinho's cross into his own net with 16 minutes remaining.

Both sides had chances to win it, with Fabinho and Zlatan Ibrahimovic going close late on.

It is a result which neither manager will be distraught or overjoyed with, as PSG maintained their advantage with 14 games left but Monaco kept themselves in the race.

The hosts got off to a perfect start when Thiago Motta's corner was flicked on by Alex to Pastore at the far post, who made no mistake.

Monaco, whose manager Claudio Ranieri has called PSG's squad "extra-terrestrial", had three chances to score within a minute.

Lucas Ocampos forced a save from Salvatore Sirigu, with Emmanuel Riviere firing the rebound wide. And Riviere had another chance to score with the next move but again missed the target.

Monaco, who handed a debut to Dimitar Berbatov as a second-half substitute, almost had a reprieve when keeper Sirigu dropped a high ball under pressure from Riviere and only just managed to smother it from the striker.

Lucas Moura forced a save from Subasic as PSG looked to kill the game off, and moments later he was made to pay for not doing better.

James Rodriguez played the ball to Fabinho down the right and the full-back's cross was put into his own goal by a sliding Silva.

And it almost got even better for the hosts. Brazilian Fabinho, who was impressive at right-back, tried to beat Sirigu high at his near post but the keeper was equal to his effort.

And in injury time, Ibrahimovic forced a fantastic save from Subasic and they almost scrambled home after Monaco full-back Eric Abidal dallied while on the edge of his six-yard box.