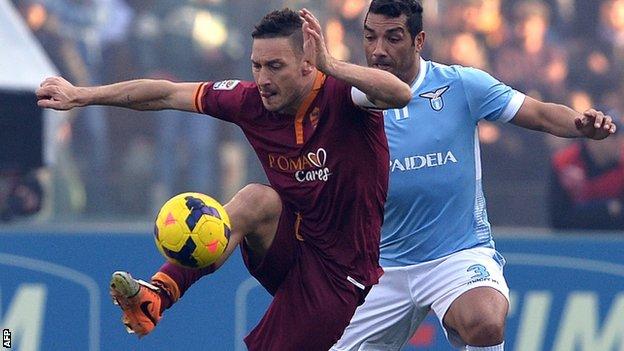 Roma missed the chance to close the gap on leaders Juventus after their three-match winning streak in Serie A ended with a draw against city rivals Lazio.

Gervinho had a close-range effort ruled out for a marginal offside as Roma remained nine points behind Juventus in second place.

Lazio threatened on the break, with Alvaro Gonzalez shooting over the bar.

No player has scored more league goals in the Rome derby than Totti, but the 37-year-old was unable to find a 10th goal in this fixture on a day Juventus lost a 2-0 lead to draw 2-2 at Verona.

Roma have a game in hand after last week's home match against Parma was abandoned because of torrential rain, but they will know an opportunity was missed.

Their last defeat was a 3-0 reverse at Juventus at the turn of the year, and the Giallorossi had scored 10 times in their three consecutive league wins since.

Roma started well as they looked to complete the league double over their neighbours, with Alessandro Florenzi volleying over as smoke from flares lit on the terraces engulfed the pitch.

Former Arsenal man Gervinho then thought he had scored his sixth goal of the season after Maicon's 20-yard shot was parried, but the offside flag stopped his celebrations.

And Totti went close with a powerful shot from distance, before Gervinho curled over when he should have done better.

But Lazio have been revived by the return of Edoardo Reja as coach and are unbeaten in six league matches since his appointment.

And, in a half swinging from end to end, they almost took the lead as Gonzalez shot over after a sweeping counter-attack.

Roma came on strong after the break, with Gervinho having a shot saved, Miralem Pjanic shooting wide and the impressive Totti dipping a strike over the bar.

Seemingly content with the draw, Lazio sat back as Roma struggled to break them down, but Bastos should have done better when he raced clear only to have his low cross cleared with two team-mates waiting to tap home.