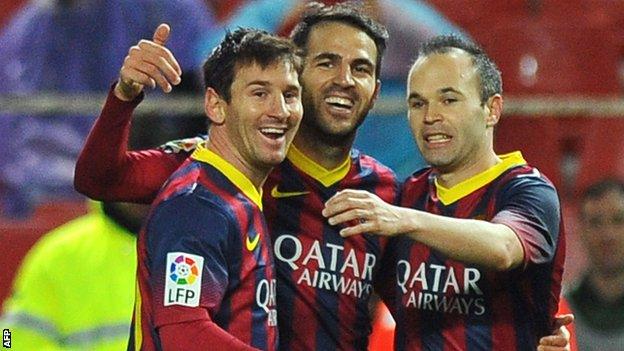 Lionel Messi scored twice as Barcelona returned to the top of La Liga after coming from behind to beat Sevilla.

Alberto Moreno's deflected strike gave the hosts the lead before an offside Alexis Sanchez levelled with a header.

Argentina forward Messi then scored either side of half-time, with a powerful shot from the edge of the area and a curled effort from similar range.

Substitute Cesc Fabregas sealed victory with a chip from close range as Sevilla rued a host of missed chances.

The win moved Barcelona top of La Liga on goal difference, with Real Madrid and Atletico Madrid level with them on 57 points.

Sevilla had 15 shots compared to Barcelona's nine attempts, but only hit the target with four of them. Barca were on target with five of their shots.

They were far from their best in a match played in heavy rain and on a saturated pitch, as the hosts dominated for large periods and created the better opportunities.

But, while Ivan Rakitic, Denis Cheryshev and Vitolo were all guilty of bad misses for Sevilla, Barca produced a clinical display of finishing to secure just a second win from their past five La Liga matches.

Messi had not scored from open play in the league since September, having missed the end of 2013 with a hamstring injury, but showed signs of returning to his best form.

He was quiet in the opening stages, though, as Sevilla started strongly and took a deserved lead when Moreno's low shot from 18 yards deflected in off Marc Bartra.

Carlos Bacca then headed against the post for the hosts before Rakitic shot wide with just visiting goalkeeper Victor Valdes to beat.

Barcelona pulled level in controversial circumstances as Sanchez looked to be in an offside position when he flicked in Messi's free-kick.

Messi put the visitors ahead just before the break when he chipped Andres Iniesta's pass up to himself before firing into the corner.

Sevilla continued to create chances after the break but, with Valdes in good form, they were unable to take advantage as Barca took control.

And Messi brilliantly curled in his second from the edge of the area before Fabregas completed the scoring with a delicate chip after Sanchez's low cross.