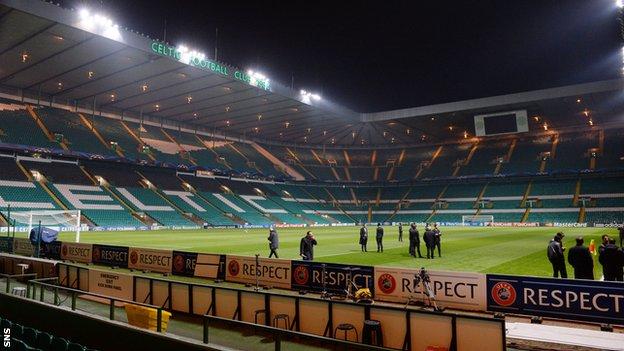 Aberdeen manager Derek McInnes believes that the Scottish League Cup final on 16 March must be played in Glasgow.

Hampden Park is unavailable as the national stadium is being redeveloped for Glasgow's Commonwealth Games.

And an announcement is expected later this week, with the choice likely to be between Celtic Park and Ibrox Stadium.

"It would probably have to be Glasgow to cope with the size of the crowd," said McInnes, whose side will face Inverness Caledonian Thistle.

Easter Road Stadium was chosen by the Scottish Professional Football League to host whose Tynecastle Stadium staged the other game in the last four.

With Inverness having a smaller travelling support than the beaten semi-finalists, it could increase the chances of Hibernian's 20,421-capacity ground being put forward as an alternative for the final.

Celtic Park has already been chosen for the Scottish Cup final, while Ibrox will host both semi-finals.

"I don't think anywhere else would be able to cope with it," McInnes told BBC Scotland. "Either Ibrox or Parkhead would do me fine. It really doesn't bother me.

"Whatever ground it is, hopefully it will be full of Aberdeen fans getting behind their team."

"It's good to have that," he said. "When we came in, we wanted to try to make people fall in love with the club again and not just go out of duty or because their fathers used to take them.

"We wanted them to look forward to coming to watch the team and I do think we are making inroads on that.

"We are far from the perfect team, but what they do get is an honesty a determination to win."

McInnes praised Caley Thistle for their victory on penalties after they fought back to draw 2-2 after 90 minutes thanks to Nick Ross's stoppage-time equaliser.

"Congratulations to them yesterday to defy the odds and get through," he said.

"Three games we've had with Inverness this season have all been won by a single goal, two 1-0 victories for either team, home and away, and then there was the 4-3 game.

"Inverness have that never-say-die attitude. It was really evident when we played them and we were 4-0 up at half-time and they came out, got an early goal and, from that moment on, every one of their players believed they could get a result.

"I think both teams will fancy themselves going into the game and both will know that they have to play well to win it.

"We've done well this season in the tournament and have still to concede a goal and we've come through some difficult ties."