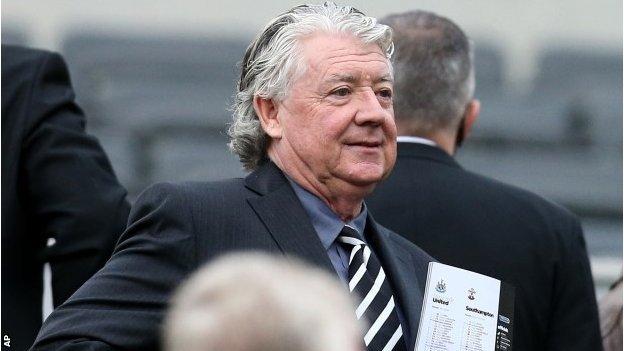 Joe Kinnear has resigned as Newcastle's director of football after less than eight months in the role.

The 67-year-old, who was above manager Alan Pardew in the club's management structure, claimed to be overseeing player recruitment.

However, the Magpies failed to sign anyone on a permanent deal during his second spell on Tyneside.

After Saturday's loss to Sunderland, Pardew made it clear he was unhappy at the club's lack of transfer activity.

"If I was in charge, solely, of transfers, things might be different but I'm not," he said. "I think I've made my opinions very clear this week and all the rest of it is confidential."

After selling midfielder Yohan Cabaye to Paris St-Germain for £19m on 29 January, Newcastle did not recruit a replacement in the remaining two days of the transfer window.

The arrival of strikers Luuk de Jong and Loic Remy, on loan from Borussia Monchengladbach and QPR respectively, were the only additions to the first-team squad while Kinnear was director of football.

Kinnear's departure, after signing a three-year deal in June 2013, brings to an end his second stint with the Magpies.

He previously managed the club between September 2008 and February 2009 before being taken ill with heart problems.

The former Republic of Ireland international's return was met with opposition from a large section of Newcastle fans, with managing director Derek Llambias resigning a day after the appointment

Kinnear, who reported to owner Mike Ashley on all footballing matters, reacted by claiming he "could open the door to any manager in the world" and asked fans to judge him on the signings he made.

But he was undermined by an interview in which he mispronounced the names of several players.

Alan Shearer, who scored a record 206 goals for Newcastle before managing them for eight games in 2009, said that he was never convinced by Kinnear's role.

"It was a strange appointment in the first place," he told BBC's Match of the Day 2.

"When you sell your best player three days before the transfer deadline you have to have a plan.

"Maybe him resigning is a way of saying he didn't do his job, but I'm not sure what his job was anyway.

"Saturday's defeat against Sunderland was as poor a performance as I've seen for a long time. They were lucky it was only 3-0."